They are drifting aimlessly in the water.

USA Gymnastics has a credibility problem. The group never bothered to address the allegations that a team doctor, Larry Nassar, was sexually abusing some of the group’s athletes. USA Gymnastics wasn’t the only one to fail to investigate the whispers that Nassar was sexually abusing gymnasts. The United States Olympic Committee and Michigan State University didn’t pursue the rumors either. Eventually, the Indianapolis Star newspaper ran a series on the Nassar abuse allegations, then there was an investigation by law enforcement.  Nassar was convicted on multiple charges. The university and sports organizations promised changes. The gymnastic group hired Kerry Perry but Perry lasted just nine months. USA Gymnastics then hired a career politician with a marginal gymnastics background as the interim replacement. Former Congresswoman Mary Bono, who won a special election in 1998 in a Southern California district to replace her husband Sonny Bono who died from injuries suffered while skiing, got the interim USA Gymnastics president and chief executive job. Mary Bono served in Congress for 15 years. She worked for a law firm that covered up Nasser’s behavior and also sent out a tweet showing a NIKE sneaker with the logo covered over in black ink protesting Colin Kaepernick’s role as a company spokesman. Bono quickly stepped down.

Hiring politicians is not a good idea for sports organizations. Michigan State hired former Michigan Governor John Engler as President to restore the school’s image. Engler was Michigan’s governor between 1991 and 2003 while Nassar worked at Michigan State. Michigan politicians including Engler heard nothing about Nasser’s alleged behavior. College programs have had sexual abuse complaints but politicians have stayed away from calling for investigations of people like Nassar and Jerry Sandusky. Sports organizations should not hire politicians to restore a brand. 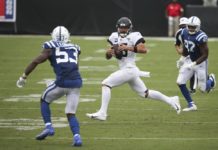 Should Buccaneers Fans Be Worried After Ugly Win?