Today Bulls Nation got to meet their new head coach Alex Golesh who has served for the last two years as offensive coordinator at the University of Tennessee under head coach Josh Heupel. He came to Tennessee with Heupel from Central Florida and in 2022 as the Vols OC Golesh he created a high-speed, high-powered offense that was the best not only in the SEC but in all of college football.

Over the past week, USF fans were watching Twitter following Deion Sanders as Coach Prime was the talk of college football as he was pondering his future which might have included coaching the Bulls. In the end, Deion decided he wanted to coach Buffalos instead of Bulls and accepted the job at Colorado meanwhile, the name of the 38-year-old Golesh started showing up on the top of the list to replace Luke Fickell at Cincinnati.

Then late afternoon Saturday suddenly Golesh’s name came out of nowhere as the man who was about to be named the sixth head coach at the University of South Florida. While to some he is a mystery in coaching circles he is considered one of the top young stars and someone who is clearly ready to become a head coach.

Today he made his USF debut introduced to the media by Bulls athletic director Mike Kelly, the man who led the search committee. Kelly also said that USF has made a major commitment to all areas of athletics, and they will lead the American Athletic Conference in creating a winning culture in all sports.

Kelly stressed that Golesh is a turn-a-round specialist who is a tireless recruiter who understands how to make the transfer portal work and is a winner that many schools had on their radar. Once Golesh took the stage he talked about his philosophy of hard work, creating a positive culture that builds winning from the bottom up. He talked about developing a player-driven team that will be as good as we can be as fast as they can be.

Golesh talked about winning and lighting up the scoreboard in the process. He talked about the importance of getting NIL support for getting Bulls Nation to be part of winning and his goal of filling up Raymond James Stadium with a winning team as soon as possible.

He also said that part of the recruitment pitch and a reason why he took the job was that USF is the fastest-rising university in America over the past decade, public or private, according to U.S. News and World Report it is the third straight year USF ranks as one of the nation’s top 50 public universities.

USF will remain in the American Athletic Conference as a rival, Central Florida, Cincinnati, and Houston are leaving for the Big 12 the Bulls hope to become a dominant force in the new AAC. Tulane is this year’s AAC Champion, and they will be facing the University of Southern California and likely Heisman Trophy winner Caleb Williams in the Cotton Bowl.

With the expanded College Football Playoff system that will begin in 2024, the AAC Champion will have a chance to win a national championship. In the new 2023 season, joining USF the AAC will have returning teams East Carolina, Memphis, Navy (football only), SMU, Temple, Tulane, Tulsa, and Wichita State (basketball and Olympic sports only). The new members joining the conference are Charlotte, Florida Atlantic, North Texas, Rice, UAB, and UTSA.

USF AD Kelly and coach Golesh made it clear they expect to be a force in football in 2023 and beyond. Kelly added that he and the staff is committed to having USF dominate both in all areas of men’s and women’s sports.

Louisville coach Scott Satterfield has been hired to become the next football coach at the University of Cincinnati, the school announced Monday. Meanwhile, Florida Atlantic will be joining the AAC next season replacing UCF named former Texas and Houston head coach Tom Herman to replace Willie Taggert. 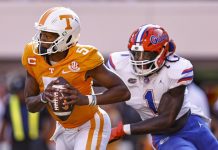 AP source: USF hiring Tennessee OC Golesh as head coach. He led the best offense in CollegeFootball with the Vols.

Deion Sanders takes the Colorado head coaching job and his son will be joining him.