TAMPA – Following home victories over Elon and Georgia Tech that have unveiled a resilient group led in no small part by a handful of first-year players, USF takes to the road for the first time this season.

Saturday’s game against Illinois (3:30 BTN) will be played at Chicago’s Soldier Field, which is little more than a two-hour drive north of the university’s campus in Champaign. It is the fourth time the Fighting Illini will play at the home of the Chicago Bears.

The matchup also completes a home-and-home series between the schools. The Bulls piled up 680 yards (second-most in team history) in winning last year’s encounter, 47-23. Much has changed with these programs since that mid-September evening at Raymond James Stadium. Not the least of which is who is under center.

USF graduate transfer Blake Barnett has showed tremendous poise and determination in totaling 629 yards (512 passing) and eight touchdowns. Three of those scores have come on the ground, including a 19-yard run to cap an 88-yard drive that proved to be the difference in last week’s thrill-a-minute win over Georgia Tech.

Barnett has been with the program only since May, but there is no mistaking the impact he has had.

“I think Blake’s presence here has really helped this football team,” said coach Charlie Strong. “The guys have really taken him in. He’s not arrogant and he’s not cocky. I think when the guys see that in him, being the quarterback, it just kind of sprinkles through the whole team.”

Illinois, under the guidance of former Buccaneers coach Lovie Smith, has used two quarterbacks in starting 2-0. A.J. Bush, a graduate transfer from Virginia Tech with his fourth school, went the distance in a season-opening win over Kent State before suffering a hamstring injury in the first quarter against Western Illinois last week. True freshman M.J. Rivers II took over and led the Fighting Illini to a win over the FCS Leathernecks.

Both quarterbacks are listed at 6-foot-4 and have a similar skillset.

“You are looking at two guys that have real good size to them and can run,” said Strong. “The offensive line is big. They are a Big Ten-looking team.”

After two games at Raymond James Stadium the trip to Chicago marks the first road game for many Bulls.

“For a lot of them it will be their first time on the road,” said offensive coordinator Sterlin Gilbert. “It’s about focusing on us a don’t worry about the things we can’t control. Worry about us and worry about what your job is. Focus on what you are supposed to do and do it at a high level.”

The Bulls operated at a high level the first two weeks. The offense has shown big-play ability and resiliency, the defense came up huge when it mattered most against Georgia Tech and special teams has excelled thanks in large part to a pair of electrifying kick returns for touchdowns by redshirt freshman Terrence Horne last week.

Don’t expect the former track star at Miramar High to say much about his performance, though.

“He works hard doesn’t say much,” said Strong. “He has so much respect from our (veteran players) because he doesn’t say much at all. He just smiles and goes about his work.”

The Bulls hope there will be plenty of smiles after going about their work in the Windy City on Saturday.

About Illinois
The Fighting Illini are looking to go 3-0 for the first time since 2011….Fifth-year senior receiver Mike Dudek, who had a game-high six receptions against the Bulls last year, is out for the season after suffering a knee injury last week. Illinois also lost the services of freshman receiver Edwin Carter for the remainder of this season due to a knee injury in his debut last week….Like the Bulls, Lovie Smith’s team is very young as 16 true freshmen played in Illinois’ first two games….Quarterback A.J. Bush started his career at Nebraska, transferred to Iowa Western (JUCO) and moved on to Virginia Tech before arriving in the Land of Lincoln….Sophomore linebacker Jason Hansen (East Lake High) has 18 tackles through two games and is tied for second nationally with six tackles for loss…..Illinois has 22 rostered players from the Sunshine State….Offensive coordinator Rod Smith served in multiple capacities in six seasons (2001-06) at USF under Jim Leavitt.

Bulls Bits
The Bulls are seeking their fifth straight win against a Power Five opponent…..USF is 1-5 all-time against Big Ten opponents…..Terrence Horne is second nationally in kick return average at 47.0 yards on six returns. He trails Oklahoma’s Tre Brown, who is averaging 47.3 yards on three returns….QB Blake Barnett has accounted for eight touchdowns (five passing) and is eighth nationally in points responsible for at 24 per game….The Bulls have piled up at least 400 yards in 12 straight games…..USF kicks off conference play against East Carolina next Saturday (8 p.m.) at Raymond James Stadium. 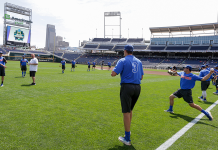 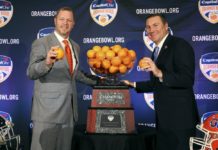 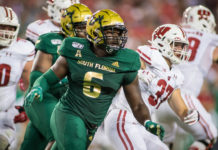