Alcantara With A Solid Start For Miami

St. Petersburg, Fla – The Miami Marlins scored four times against Blake Snell in the fourth inning en route to a 7-1 victory. The Marlins victory ends a nine game losing streak against the Rays that dates back to July 18, 2018.

Blake Snell (3-1, 3.74 ERA) takes the loss for Tampa Bay who see their record fall to 27-13. He allowed five runs, four earned, spanning five innings on six hits while striking out six and walking three. He threw 92 pitches with 57 for strikes.

Snell was most upset about the walks calling them lazy. He says he’ll be looking at video to clean that up before his next start Friday. “I just have to be better. I mean I keep doing the right things but still, the walks.” Snell said. “I definitely got to clean the walks up. I gave up two to Aguilar that’s terrible.”

Sandy Alcantara (2-1, 3.78 ERA) picks up the win for the Marlins who improve to 17-17. The victory improves the Marlins road record to 15-8. Alcantara held the Rays to one earned run spanning six innings on just three hits while striking out eight and walking three.

Richard Bleir followed Alcantara to the mound and threw a scoreless seventh.

Brandon Liebrandt worked 1.2-innings allowing two earned runs on two hits while striking out one and walking one before giving way to Brandon Kintzler who retired Joey Wendle to pick up the save, his ninth of the year.

The Marlins scored four times in the fourth inning to give them a comfortable lead. Jesus Aguilar opened the inning drawing a walk and moved to third on Brian Anderson‘s double. Snell came back to strike out Lewis Brinson but a passed ball by Michael Perez allowed Aguilar to come home with the games first run. Harold Ramirez drove in Anderson with a single and he came trotting home on Corey Dickerson 2-run homer. It was Dickerson’s sixth homer of the season, third against the Rays, and all coming off left-handed pitchers (Josh Fleming twice, Blake Snell).

The Marlins added a run in the fifth inning when Brandon Lowe overthrew Lewis Brinson’s groundball allowing Jesus Aguilar to score from second.

Tampa Bay cut the lead to 5-1 in the bottom of the fifth inning on a 1-out double to score Yoshi TsuTsugo from first. TsuTsugo had walked to lead off the inning after Sandy Alcantara had to wait through a lengthy delay as a cart was summoned to remove Harold Ramirez from the field with a left hamstring injury.

Matt Joyce entered the game for the injured Ramirez and delivered a 2-out 2-RBI single in the seventh inning to extend the Marlins lead to 7-1.

Cody Reed came in to open the eighth inning and retired the first two batters before departing with an injury. The Rays don’t seem overly concerned. “Finger soreness, pinky finger.” Kevin Cash said of the injury. “We’re not overly concerned but we’ll have a doctor check it out and see what comes of it.”

He was replaced by Aaron Loupe who worked the final 1.1-innings without allowing a run.

The Rays rallied for two runs in the ninth inning loading the bases with two outs for Michael Perez who once again made his hit count driving in two with a single to cut the lead to 7-3.

Perez’s hit ended the night for Brandon Liebrandt and Brandon Kintzler came in to retire the final batter.

Perez finished the night with three hits and three runs driven in. He now has 12 hits and 13 runs driven in on the season. Perez has been getting much more consistent playing time since Mike Zunino went on the disabled list with an oblique injury on August 29th. He’s made the most of it raising his average from .161 to .214 since August 26th.

“It’s helped to be able to find a little bit of a rhythm at the plate.” Kevin Cash said of Perez’s increased plying time. “He’s put some good swings here as of late. He’s kind of turning his brief season around or brief opportunities, he’s making the most of these opportunities with Z [Zunino] down. He’s done a really nice job behind the plate and hopefully that focus continues.” 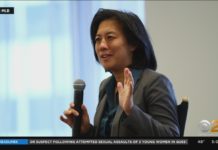 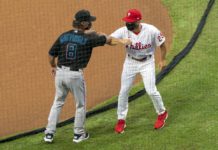