Plant City FLA- The XFL is underway as they prepare to reboot the league in February of 2020 after releasing the uniforms and helmets of the eight teams this passed Tuesday. The XFL teams include the Los Angeles Wildcats, Tampa Bay Vipers, Seattle Dragons, DC Defenders, New York Guardians, St. Louis BattleHawks, Houston Roughnecks and Dallas Renegades.

The Tampa Bay Vipers took the field earlier this afternoon for their first official practice at the Plant City Stadium as a full roster was in attendance to shake off some rust for the upcoming season. Most of the Vipers were already familiar with one another as they played together in the AAF league that folded earlier this year.

General Manager and Head Coach Marc Trestman preached on the XFL and when asked how this was going to work, he had no doubt in his speech. “The XFL is for real and the commitment to Mrs. McMahon is serious and this is going to happen.” Mark Trestman coached the Alouettes to two Grey Cup championships and later reunited with general Manager Jim Popp to run the Toronto Argonauts.

In 2013, Trestman coached the NFL’s Chicago Bears for two years to then work as offensive coordinator for the Baltimore Ravens. He then returned to the CFL in 2017 to coach the Argonauts, who was then managed by long-time Alouettes GM Jim Popp. Trestman lost his job after the 2018 season, in which the Argonauts went 4-14.

It’s a fresh start for QB/RB Quinton Flowers after returning from a year and a half in the NFL. “It means a lot”. When asked of his return to the Tampa Bay area. “For one, like I’ve been said I always felt like I would be back home, just didn’t know when. God blessed me with the opportunity to come back and open up a new league and start all over again and get a fresh start. So it feels good to be back home and get another opportunity to go in the quarterback room and give it another shot.”

Once a USF Bull starting quarterback, Flowers was the American Athletic Conference Offensive Player of the Year in 2016, rushing for 1,530 yards and 18 touchdowns and threw for 2,812 yards and 24 touchdowns with only 7 interceptions. The XFL season is set to kick-off in February 2020 as the Tampa Bay Vipers face the New York Guardians Sunday, February 9th at 2pm on 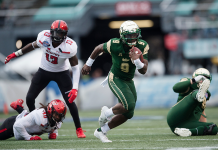 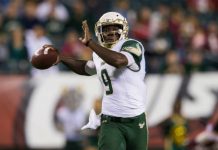 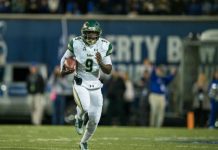