An old TV show gets another chance.

The Big Game is done, the football season is over. Well not quite yet. The National Football League Scouting Combine starts on February 23 in Indianapolis and football fans can get excited with prospects running sprints and lifting weights in shorts and T-shirts. But for those who cannot wait, Vince McMahon will be presenting his latest version of the XFL starting this weekend. XFL games will be on television and there will be a betting line. The question is whether McMahon’s XFL will gain any traction after the first week. In 2019, the undercapitalized Alliance of American Football had decent television ratings during its short life. The winter-spring sports calendar is quite crowded with the NCAA’s crown jewel, March Madness, along with regular season National Basketball Association and National Hockey League games, baseball spring training, golf including the Masters and Major League Soccer games. The XFL will have a 10-week schedule. The championship game will be played on April 28. Vince McMahon owns the business which is a major difference from XFL I which lasted one year in 2001. McMahon’s 2001 partner was NBC television.

NBC hoped to get good ratings for a late winter-spring product. But NBC also wanted to make the XFL an sports-entertainment package much like McMahon’s World Wrestling Entertainment. The notion failed. The football people took control by midseason but consumers lost interest. The XFL might have continued had NBC not pulled the plug. ESPN expressed an interest in picking up the programming in 2002 and the TNN network would have returned for a second year.  NBC didn’t want a competitor airing its product. That ended the XFL and left a number of football people extremely bitter. The XFL did lose $50 million. The odds are stacked against the XFL. 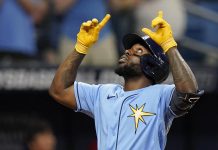 Rays get set to face the first place Yankees in a big weekend series at “The Trop.”