Shortstop. It’s the position you want to play most if you’re not pitching. It is the first place every manager tries to put his best athlete, the guy who can cover the most ground, pick it, and throw rockets to first base. The minor league system is littered with shortstops. Oftentimes you’ll see teams draft them over and over knowing you can move them elsewhere, but that is the spot where the best player is often found. And man, we might have the best group of shortstops in baseball history playing all at once in 2017.

Time will tell of course, but this is a phenomenal group of players. So much quality youth. It’s ridiculous quite frankly. A dozen of these guys are under the age of 25, and many of them have accomplished a lot already.

The 2016 Fall Classic featured a pair of sensational 22-year old’s, Francisco Lindor and Addison Russell. Dodgers SS Corey Seager was the rookie of the year, and he may not have beaten out the Rockies Trevor Story who broke the rookie SS home run record (27) if he didn’t get hurt!

Manny Machado is a gold glover on the hot corner, but played plenty at short (his natural position) last year when JJ Hardy got hurt. The White Sox feature 22-year old Tim Anderson who stole 49 bases in the minors.

Andrelton Simmons plays defense as well as anyone still for for the Angels. Jean Segura and Didi Gregorious are coming off career seasons, and Troy Tulowitzki is still getting it done in Toronto. Dansby Swanson and Orlando Arcia both candidates for rookie of the year this season in the National league and Trea Tuner would be if he hadn’t scorched the Earth in his elongated call-up a season ago.

Aldemys Diaz was a stud last year for the Cards and Brandon Crawford is a star for the Giants. I didn’t even mention hyped prospects JP Crawford, Gleybner Torres, Amed Rosario, Brendan Rodgers, Willy Adames, or Ozzie Albies who could show up on the scene this year.

Oh, and maybe my favorite young player, Carlos Correa. I believe he could be center stage for baseball fans this year because… 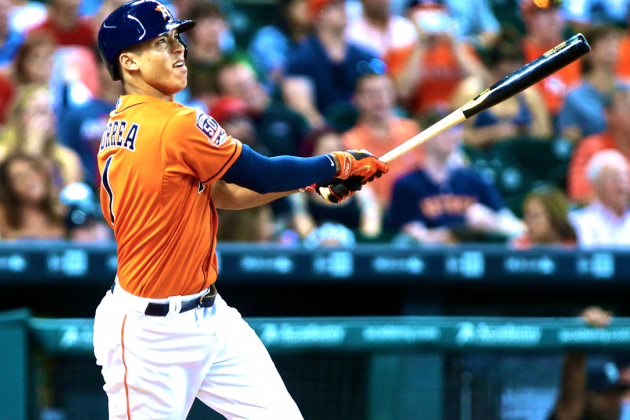 I think the Houston Astros will win the World Series! Their front office has been patient in putting together the roster, and then aggressively filling the holes the last two years. They didn’t even make the playoffs last year, but they’re ready.

Not everyone has a shot to get the World Series this year, or even the playoffs, but there are a healthy number of teams that I could see do both in each league.

Starting with the American League, the AL East was surprisingly less competitive last year than projected. I don’t see the Rays or Yankees making the playoffs, but each will have it’s moments and should finish around .500. The Jays, Sox, and O’s should battle it out, and potentially two or three of them make the playoffs.

In the AL Central, it’s all about the Indians. The Tigers could threaten for a playoff spot, and the Royals have some potential, and are probably being written off too fast by most of us. A healthier lineup should have them above .500. The Sox and Twins are still building for the future and will play a ton of kids this season.

Out in the AL West, I love the Astros obviously, but they’ll get plenty of competition. The Rangers and Mariners each bring a lot to the table, and all 3 teams could get to the postseason. Poor Mike Trout looks likely to miss the playoffs again in LA, and the A’s should be better, but probably still sit in last place.

I think the National league is probably more apt to see some changes in the standings from a year ago. Starting in the NL East, the Nats should be considered the favorites after all their offseason tinkering, and a healthier staff going into the year than the Mets. I’m not sure if we’ll ever see the Mets roll out their 5 young starters on 5 straight days at this point. The Braves got tired of losing, and have a new stadium they want to sell seats in so they spent a little money, and it could be enough to push them out of the basement. I actually could see the Marlins sinking to the ocean floor, and the Phillies young staff and roster battle for .500.

The Cubs are too loaded to lose the Central, but the Cardinals are too smart to let it be as easy as it was a year ago. We’ll find out how important Dexter Fowler is as he switched rivals in the offseason. The Pirates window may have closed last year, but they have enough youth to re-open it, but they’ll have to be aggressive sellers this year so their youth has a chance as it enters it’s prime over the next couple of years. The Brewers fascinate me and I could see them finishing in the 3rd with their young bats. The Reds look lost in the forest.

In the NL West the Dodgers have won 4 straight division crowns and over 90 games each year and look poised to do it again. The Giants certainly have the punch not only to win the division, but to win another World Series. The Rockies and Diamondbacks each have loaded lineups, but have struggled pitching. On paper, Arizona looks like they should turn the corner, but I’m not sure they will. The Padres are my pick to have the worst record in baseball.

I’m picking Houston over Los Angeles. The Dodgers have the record (ongoing) for most postseason appearances without a trip to the World Series, but I see them finally breaking through. I like the Astros to win it though because their roster potentially features 9 guys that could swat 20+ home runs this year (Correa, Altuve, Bregman, McCann, Gattis, Beltran, Reddick, Guerriel, Springer) and a bullpen that should be one of baseball’s best. The rotation would benefit from bounce-back seasons from Keuchel and McHugh, but should be buoyed by the young trio of McCullers, Martes, and Musgrove. Charlie Morton might be a sneaky good addition too. Or as they could affectionately be known: mmmmk. (SouthPark fans get it)

If I’m right, you heard it here first.