The franchise owner wants a new home for his team in Oakland or Las Vegas by 2025.

The ongoing tale of where Major League Baseball’s Athletics franchise will play in 2025, Oakland or Las Vegas, continues. The negotiators for John Fisher’s Oakland Athletics franchise were in Las Vegas last week and have picked out about a dozen sites for a possible stadium location. Athletics ownership hopes to get that list down to three or four by November. Meanwhile back in Oakland, things remain in flux. A couple of weeks ago, Alameda County, California decided it did not know if it wanted to be a part of a special tax district that would be set up for the planned Athletics Oakland waterfront stadium-village complex. Fisher needs Alameda County on board to help with public funding for his proposed development. Fisher’s company is doing the due diligence needed if he decides Las Vegas is the perfect home. Fisher’s negotiating team has found out from Las Vegas area focus groups, that people who would be interested in going to Las Vegas Athletics games and they would like something to do outside the stadium in a ballpark-village setting.

There is a question that needs to be answered. Can Las Vegas support the 81-game MLB home schedule? A major league sports owner has to have government support, which could include public money to build a stadium or tax breaks or incentives, a cable TV deal that brings in a chunk of money and corporate support. Major League sports would rather have customers not fans because customers spend money on valet parking, eat at in-venue restaurants, buy merchandise and are willing to spend big money on seats as opposed to fans who like cheap tickets and would rather bring their own food and drinks to a game. More TV and corporate money is available in Oakland. Las Vegas would be MLB’s smallest market and that’s a problem. 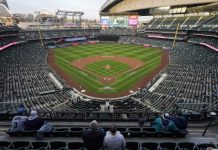