Twenty years later, the narrative of 1998 doesn’t fit the memories

Twenty years ago, the game of baseball was saved from a sharp decline out of relevance. It was saved by a compelling story about two likable sluggers in the National League Central who were chasing the single season home run record that had stood for 37 seasons.

Mark McGwire and Sammy Sosa were the talk of sports in 1998. They became the story of the year over Michael Jordan’s final championship run, the emergence of Tiger Woods as a worldwide superstar, Peyton Manning’s rookie season, John Elway’s final season, and the Nagano Winter Games. Along with Ken Griffey Junior, the 1998 New York Yankees, Pedro Martinez, and a few others, McGwire and Sosa were said to have saved baseball.

Twenty years later, rather than celebrating the anniversary of one of baseball’s most compelling seasons, the anniversary will linger like the proverbial elephant in the middle of the room.

The season that saved baseball is now seen by many baseball fans—and the majority of Hall of Fame voters—as nothing but a con. When the great home run chase of 1998 is brought up this year, as it inevitably should be, it will as often be spoken of as an exercise in fraud as it will a critical moment in baseball’s recent history.

2018 in Major League Baseball will put to the test the true ability of the sport to change the facts of its own history. The sport has, for about thirteen years now, acted seemingly ashamed of what happened in 1998.

On September 16, the St. Louis Cardinals will have a Mark McGwire bobblehead giveaway in celebration of the 2oth anniversary of his 70 home run season. Likely, then, the Cardinals will likewise celebrate the home run chase of 1998 and what it meant to baseball in St. Louis if not baseball in general.

The Cubs will not be doing the same for Sammy Sosa, who is on the outs with the Ricketts family that owns the team. In January, Tom Ricketts came out and said that Sosa will not be welcome at Wrigley Field until he apologizes for his use of performance enhancing drugs.

To date, Sammy Sosa has not apologized, nor has anyone affiliated with the Chicago Cubs returned any of the money they earned from tickets and merchandise sales driven by the performance of “Slammin’ Sammy.” Also of note, not a single number produced in 1998—or the entire Steroid Era for that matter—has been rescinded. Every run scored, every home run hit, every game played still stays on the record.

Simply put, what happened happened. All those home runs happened. Players took various substances that played a role in getting them in a position to hit all those homers. Major League Baseball struggled with what to do about it for years. Many baseball fans knew what was going on.

That’s right: We knew. We knew then. There had been jokes about players like Jose Canseco being on steroids since 1988, ten years before the home run chase. During that chase, a reporter spotted something known as “Andro” in McGwire’s locker and his story was not swept under the rug.

We joked at the time about McGwire being on “the juice.” Sosa got the same treatment. No wool was pulled over any eyes. Nothing was covered up on any grand scale. All the circumstantial evidence was all there, we just chose not to care, much the same way we choose not to care that NFL players look increasingly unnatural while producing increasingly superhuman results.

Why, then, do so many baseball fans today act as though we were all the victims in a grand fraud? Why do people feel so good about using hindsight to change the reality of what 1998 really was?

In 1997, the World Series went seven games, culminating in a thrilling seventh game complete with a late lead change. Outside of the die-hard baseball fans, nobody watched it. Livan Hernandez never truly captured sports’ imagination the way a lot of champions do. That late 90s Indians team owned Cleveland, but often outside of Ohio it seemed as though they were an afterthought.

Before the 1998 season, people wondered if MLB’s decline might take it to a NHL-like place in our sports culture; a regional sport with apathetic crowds in many places. Football had already usurped baseball as our most popular sport, and with Michael Jordan still in the NBA at the time that league had only seen interest rise over the years.

The sport, simply put, was losing interest in the wake of the cancelled 1994 World Series. Keep in mind that the strike’s impact lasted beyond 1998. The way the labor dispute shook out allowed player salaries and team payrolls to skyrocket, which gave rise to a perception that baseball had become a game of “haves and have-nots.” While years of new tactics from Moneyball to the 2008 Rays’ stock market inspired operations, and years of best practices has narrowed that gap considerably, the perception still stands. All of this can be drawn back directly to the owners “losing” the labor dispute and failing to put a hard salary cap in place.

You do not have to feel good, morally, that steroids and other performance-enhancers were involved with baseball’s late 90s and early 2000s power surge. That said, a little bit of honesty would go a long way into putting it all in perspective.

Say you feel differently about it now. That’s fine, but those of us who remember 1998 cannot pretend we did not enjoy every second. I remember standing with my dad outside of a storefront, watching McGwire and Sosa bat with a sizable crowd of people.

I also remember reading a story about a strange substance found in McGwire’s locker. This was so well known that I was aware of it as a fifteen year old at the time. I remember people caring about this, but only in the sense that they were upset with the tattletail who wrote it.

Nobody, as far as I know, ever sought out that writer to apologize. If anything, the story told is now that it was a wild rumor, that nobody knew McGwire was on any substances and the public was not at all suspicious.

One of the greatest pieces of revisionist history I have witnessed in my life is baseball’s insistence that fans, analysts, and people associated with the sport were wholly unaware of the idea of steroids in baseball in 1998. We’ve accused Bud Selig of all but actively smuggling the substances into lockers himself. We’ve accused Barry Bonds of such blatant drug use I’m surprised nobody’s lobbied to stick a parental advisory sticker on his forehead.

Us sportswriters, however, oh we just had no idea. Nobody could have looked the other way. How could we have known, just a decade after Ben Johnson, that baseball players would try the same things athletes in an increasing amount of other sports were trying to get away with? That was entirely Bud Selig’s job. Nobody could have used their keyboards to tell the world that something fishy was up, nope, our hands were tied.

The revisionist history should insult baseball fans., who in it are portrayed as essentially stupid and empty vessels that were wholly oblivious to a sudden spike in power numbers and a rise in the average Major League ballplayer’s hat size. It’s not like the entire Fenway Park crowd was chanting the word “steroids” at an Oakland Athletics team on which Mark McGwire played in 1988.

It’s revisionist history because, naturally, none of it is true. People absolutely suspected McGwire and especially Sosa, who to that point had been a good player who had shown no indications of being able to hit 60 homers in a season. The story about Andro in Mac’s locker did in fact get out and become well-known. People were on their toes about steroids already, this not being too long after the death of football player Lyle Alzado.

Any reporter who didn’t notice an across-the-board jump in power numbers headlined by a record that was close to 40 years of age falling twice in the same season, well, I just know that I would personally be embarrassed to admit such a thing.

There will be celebrations of the 1998 season twenty years later. The New York Yankees put out a historic team that year, likely the best of their late nineties dynasty, and rest assured that the likes of Paul O’Neill and Bernie Williams will be honored at Yankee Stadium.

With Trevor Hoffman earning induction to the Hall of Fame this season, the San Diego Padres will undoubtedly celebrate both him and the Padres’ 1998 National League Pennant. San Diego has yet to return to the World Series, after all, and droughts like that make 1998 feel more recent than it may be in reality.

Barring a later induction care of the veterans’ committees, neither McGwire nor Sosa will be enshrined in the Baseball Hall of Fame. The 1998 season is recognized within the walls of that museum, but the primary people who made it so compelling will be left outside. All records are featured in the Museum, and that includes those records influenced by performance-enhancing drugs. Memorabilia and photographs from historic events and moments in the sport’s history are on display as well. Rest assured, McGwire and Sosa’s presence will be felt in that building.

Yes, the voting habits for the Hall of Fame are changing and it may turn out to benefit other players who have been touched by the PED scandals, but McGwire and Sosa will not be among them.

Indeed, it’s considered inevitable by many who watch these things that Roger Clemens, Barry Bonds, and possibly others will pass the voting threshold eventually. The numbers are certainly trending upward. The argument, and it’s a hard one to counter, is that it is increasingly strange that the Steroid Era is just being left out of the Hall.

How strange will it look, then, when PED users get inducted but Mac and Sammy are left at home? We already inducted the commissioner who was in charge of the league when it all went down, after all.

How strange does it look that baseball is getting ready to play a season twenty years after it was the talk of the sporting world, and there are no anniversaries? 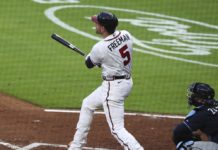