ST. PETERSBURG, Fla. (AP) — It wasn’t just another night at the ballpark for the Houston Astros and Texas Rangers, who can’t stop thinking about everyone back home affected by Hurricane Harvey.

The stands at Tropicana Field were mostly empty, the “home” team dressed in the visitors clubhouse, and the “road” team wore white uniforms they usually wear at home.

The three-game series that concludes Thursday was moved from Minute Maid Park because of flooding in the Houston area, with the Astros serving as the home team after the Rangers declined a proposal to play the games in Arlington, Texas. 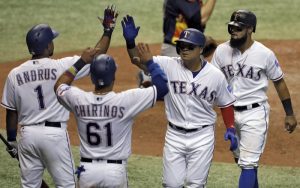 “I thought both teams kind of handled the situation, getting on a plane and flying over here and really getting set up to play a baseball game,” manager Jeff Banister said after the Rangers opened a series moved 1,000 miles to St. Petersburg, Florida, with a 12-2 victory in front of an announced crowd of 3,485.

Shin-Soo Choo homered and drove in four runs, backing the strong pitching of Martin Perez, ironically helping Texas move ahead of Tampa Bay in the AL wild-card standings while playing in the Rays’ ballpark.

Adrian Beltre of the Rangers drove in three runs to pass Hall of Famer Ernie Banks for 28th on the career RBI list with 1,637 while Joey Gallo hit a two-run homer off Mike Fiers (8-9).

“We were really motivated to do well for Houston, but looking on the TV with Houston half under water is kind of hard,” Rangers third baseman J.D. Davis, who also pitched an inning, said.

“We played hard. We just came up short. Good for the Rangers,” Davis added. “They had three big innings. There’s nothing much you can do. It’s just baseball.”

It’s only the fourth time in major league history that games have been relocated to neutral sites because of weather.

The Astros were involved as well in 2008, when two scheduled home games against the Chicago Cubs were moved to Milwaukee because of Hurricane Ike.

Three games between the Angels and Indians were played in Milwaukee instead of Cleveland because of snow in 2007, and two games between the Montreal Expos and Florida Marlins were moved from Miami to U.S. Cellular Field in Chicago due to Hurricane Ivan in 2004.

Choo had an RBI single off Fiers, who allowed eight runs in four innings. He added a three-run homer off reliever Francis Martes in the fifth.

The small but lively crowd included Carolina Padilla, who made the 90-minute trip to the domed stadium with two 9-year-olds — one of them her son, David, who wore an Altuve jersey.

“It’s awesome. It’s wonderful,” she said. “When we found out this morning they were playing here, they were like, ‘Oh, we have to go!’”

Seating was limited to the lower level, with tickets going for $10 each. Some Astros fans wore orange T-shirts, one Rangers fan showed up wearing a Dak Prescott football jersey and a handful of people showed up in Tampa Bay Rays gear.

Small crowds are routine at the Trop, where the Rays rank last in the major leagues in attendance, averaging just 15,614 per game — roughly half — what the Astros (30,661) and Rangers (31,370) have drawn in their home stadiums this season.

“I’m really disappointed that some more people didn’t show up. It’s no big secret that the Rays could move, and Major League Baseball is watching this,” Tampa resident Jeff Justin, who described himself as a Cubs fan who supports the Rays, said. “This is sad. It really is.”

Banister said before the game that the prospect of the series attracting small crowds should not affect either team’s commitment to playing for people affected by the storm.

“If at this moment they need people in the stands to have them charged up to play the game,” Banister said, “they aren’t playing for the right reasons.”

There’s still been no official announcement on where the Astros will play this weekend’s “home” series against the New York Mets, though it likely will be Tropicana Field. If the team, which begins a 10-game trip after facing the Mets, remains in St. Petersburg through Sunday it will wind up playing 19 consecutive games away from Minute Maid Park.

“Nineteen-day trips are never easy, if that’s what it turns out to be, but it’s also a time when you want to be there with all the chaos going on in Houston,” Astros broadcaster Todd Kalas said. “It’s a very emotional time for a lot of the guys involved. Many of them have family members who have either had to evacuate or are in the process of evacuating, so it’s nonstop communication back home and certainly a lot of concern and fear.”