NEW YORK — Long before Pete Alonso was the New York Mets first baseman he was a star at Tampa’s Jesuit High school and then he was an All-SEC selection as a player for the Florida Gators. Tonight, in Los Angeles he will be trying to become the first player to win three times in a row, and in the first round he will face the No. 2 seed Atlanta outfielder Ronald Acuña Jr., the seventh seed.

The matchups are set for baseball’s home run derby.

Philadelphia Phillies slugger Kyle Schwarber will be the top seed Monday at Dodger Stadium thanks to his 28 home runs through Wednesday — most among the eight players in the field.

Schwarber will face eighth-seeded Albert Pujols of the St. Louis Cardinals in the first round..

Third-seeded Corey Seager of the Texas Rangers, added to the American League roster Thursday as an injury replacement for the All-Star Game Tuesday, will square off against 21-year-old Seattle rookie Julio Rodríguez, the No. 6 seed.

Seager spent his first seven major league seasons with the Dodgers before signing with the Rangers last offseason.

No. 4 seed Juan Soto from the Washington Nationals opposes fifth-seeded José Ramírez of the Cleveland Guardians.

The seeds and matchups announced Thursday night by Major League Baseball were based on the home run totals of each player through Wednesday.

Alonso hit 74 total home runs in last year’s derby at Denver’s Coors Field and beat Baltimore’s Trey Mancini 23-22 in the final round. Alonso joined Ken Griffey Jr. (1998-99) and Yoenis Céspedes (2013-14) as the only players to win consecutive titles. Griffey also won in 1994 and is the lone three-time champion.

Pujols will participate in his fifth derby after coming up short in 2003, 2007, 2009 and 2015. He and Detroit’s Miguel Cabrera were added to the All-Star rosters as special selections by Commissioner Rob Manfred.

Rodríguez will be the 14th rookie to participate in the derby, and only two of those have won outright: Alonso in 2019 and Aaron Judge in 2017.

Judge leads the majors in homers with 31 and is set to start the All-Star Game as the top vote-getter in the AL, but the New York Yankees star is not participating in the derby. 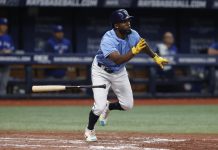 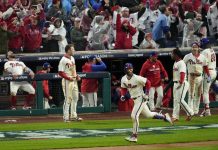