Major League Baseball Commissioner Rob Manfred has replaced the National Football League Commissioner Roger Goodell as the number one target of the fire the Commissioner now crowd. Goodell has gone from most hated to forgotten as the National Football League’s favorability has rebounded among sports fans. Manfred is now the target. Fans don’t like his rulings on the Houston Astros sign stealing caper. There has been some backlash on the plan to eliminate 42 minor league teams after the 2020 season. Fans don’t like proposed changes to the game. Baseball is an 19th century game that needs to do business in the 21st century. But Manfred is not going anywhere unless he usurps owners’ powers or the money train stops rolling. In 1992, MLB owners didn’t fired Fay Vincent as commissioner. He resigned after a no confidence vote. Eighteen owners didn’t have any trust in Vincent’s ability to run the industry in the way the owners thought it ought to be run.

Vincent’s fatal flaw? He paid attention to the players. Commissioners serve the owners, not the players or the fans. The job is to make money for the owners in TV deals, in stadium deals and marketing. Manfred has done well on the TV side of things, there are politicians willing to spend public money like Tampa Mayor Jane Castor who would but a municipally funded stadium and accept 41 Tampa Bay Rays home games in a time share arrangement with Montreal hosting the other games. There are people in Nashville and Portland looking for public money to show Manfred that they have what it takes to own a Major League Baseball expansion team. Manfred will be put to the test shortly as a new collective bargaining agreement with the players has to be negotiated. But as long as the money train is rolling, Manfred is fine no what fans think. 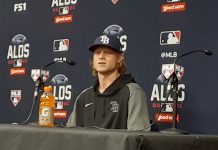 It Is Getting Late, Early In The Rays’ Stadium Game

Live Coverage Word Series Game 6: Astros hope to even things up in Houston while Braves hope to end things tonight.