MLB will mull over the Dyersville, Iowa ballpark as a one game option annually.

There is absolutely no chance that Iowa will ever see a major league sports team within its borders but Iowa Governor Kim Reynolds is willing to spend money to land one Major League Baseball game a year at the Field of Dreams stadium in Dyersville. Reynolds is allocating $12.5 million to the “This is Iowa Ballpark,” group which is a nonprofit that is building a permanent stadium. The “This is Iowa Ballpark” group now has $45 million in public money for the $50 million project. Reynolds is giving money to the Dyersville backers that is coming from a federal coronavirus relief fund. The Dyersville ballpark has hosted two Major League Baseball games because MLB needs a gimmick to sell baseball and can tie the Iowa park into an 1989 movie called Field of Dreams. The Field of Dreams Movie Site is now an Iowa tourist destination.

But locals want more than a movie site in a corn field. The usual political sports rhetoric applies here. A permanent stadium would be an economic generator. A feasibility study released after work was done by Travel Dubuque predicted the site would draw 136,000 visitors a year, create 81 jobs, host 62 events and generate $9.1 million in economic activity in the first year of stadium life. How good are the jobs? Probably minimum wage positions. But Dyersville City Administrator Mick Michel told the Des Moines Register the stadium was worth public investment because it would generate spending on hotels, shops and restaurants. But there is the troubling part of the study. The study projects that about two-thirds of the stadium’s economic impact would come from an annual MLB game and MLB may not hear the movie’s bromide, if you build it, they will come. Gimmicks don’t have a long life. 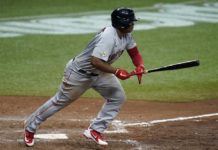