The Rays return home after a successful 5-1 road trip. With David Price on the mound, the team looks to extend its current winning streak to six games. Here’s how they’ll lineup:

6:15 Update: One of the concerns coming into the season was the turnover in the Rays bullpen and how this new collection of names could possibly replace the likes of Rafael Soriano, Joaquin Benoit, Grant Balfour, Dan Wheeler, and Randy Choate. One way of helping a bullpen out is letting starting pitching carry most of the workload and that is exactly what the Rays have done during this success in recent weeks. In the club’s last loss, the bullpen threw 67 pitches in relief of Jeremy Hellickson. Thanks to the hot pitching of the rotation since, and the off days, both scheduled and unscheduled, the bullpen had to throw but 106 pitches the rest of the road trip and return home well rested. This is something they have done well all season long.

7:15 Update: Price gets through the first on 20 pitches striking Torii Hunter and Vernon Wells in back to back at bats to get out of the inning. He threw as hard as 97 that inning and already have five swings and misses from the Angels who have looked very tardy on their swings so far.

8:30 Update: Price’s rough night continues as the Angels get all three runs back in the top of the fourth. Rays-killer Howie Kendrick doubled to open the inning, and moved to third when Price’s pick-off attempt ended up in center field. Erick Aybar singled him in to atone for his own error in the bottom of the third and Mark Trumbo followed up by crushing a mistake fastball from Price deep into the left-field stands. Price’s pitch count is up to 76 pitches through just four innings and the fifth could be his final inning of work. Nobody is up in the pen right now as the Rays bat.

9:00 Update: Price’s night is indeed done and it is one he would rather forget. His final line: 4.1 IP, 12 hits, 5 ER, 1 BB, 4 K, 1 HR, 1 WP, on 98 pitches (60 for strikes). It is his shortest inning since the debacle in Texas on 7/4/09 when he failed to make it out of the second inning.The 12 hits allowed are a career high as well. The Rays successfullly employed some strategy in the fifth by walking Kendrick and eventually getting the double play ball off the bat of Erick Aybar to end the inning. The Angels have had 12 hits and yet have only five runs allowing the Rays to stay in the game despite only three base hits. Ervin Santana has been effectively wild as he has 77 pitches on the evening, 31 of them for balls, but the Rays have done very little outside of the Joyce bomb in the 3rd inning.

9:30 Update: Juan Cruz was very effective in keeping the Rays in the game and the game just got interesting. Matt Joyce was ejected for arguing a strike three call (it was clearly a strike) and Joe Maddon has elected to give up the DH by putting Johnny Damon in left field and moving Sam Fuld to right. Cesar Ramos enters the game and now the pitcher spot is in the clean-up role leaving just Elliot Johnson, Dan Johnson, and Kelly Shoppach available to pinch hit. It would not surprise me to see Andy Sonnanstine hit and he is currently warming up in the bullpen to replace Ramos.

10:00 Update: The Rays are down to their final six outs as they try to tie up the three-run deficit they’ve created for themselves. The Angels have hit the ball very well tonight as they have had 19 baserunners already tonight thanks to 15 hits and four walks. That well-rested Rays pen has now thrown as many pitches tonight as they did in the 11 inning affair in Toronto this time last week and they are still going. Jake McGee is ready to come in for Russell who is close to 40 pitches himself.

10:30 Update: The winning streak is over as the Rays magic runs out. They get five runs on just seven hits while the Angels busted out 8 runs on 17 hits and a few walks as the Rays pitchers, outside of Cruz and Kyle Farnsworth, were not terribly sharp. The have to be back here in less than 12 hours as first pitch is at 1:05 tomorrow. 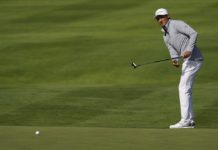 In milestone for China, Li Haotong leads halfway through PGA

In milestone for China, Li Haotong leads halfway through PGA