A’s Baseball in Oakland is not a hot ticket.

Not too many people are flocking out to the old ballpark in Oakland to see Oakland Athletics baseball so far in 2022. That should come as no surprise as the Athletics’ owner John Fisher is pitting Oakland against Las Vegas in the stadium game and has traded away the team’s veteran players who can make some money. The Athletics franchise dating back to the days in Philadelphia has been trading away expensive players so Fisher is just repeating a historic trend that started with Connie Mack who was the owner and manager of the Philadelphia A’s. Mack, though, never threatened to move his franchise. The team would leave Philadelphia after 1954 for Kansas City despite the fact there was a local group of investors who wanted to buy the team. Charles Finley moved the team to Oakland after the 1967 season. The franchise is stuck in Oakland if Fisher wants to stay in the Bay Area because the San Francisco Giants organization controls the lucrative Silicon Valley area and the San Jose market thanks to Major League Baseball’s territorial rule and a previous Athletics’ ownership that ceded that part of the market to Giants ownership.

Fisher seemingly is tearing down his Oakland business which could give him an excuse to leave the Bay Area for Las Vegas. Fisher has proposed building a stadium-village at an area called Howard Terminal on the San Francisco Bay waterfront in Oakland but he has not yet been able to secure various municipal approvals and public money to help fund the project. In Las Vegas, Fisher is looking at various areas where a stadium could be built. But he is also looking for public funding for a Las Vegas stadium and so far, it is not forthcoming. Fisher will play the stadium game until someone gives him public money so he can set up shop there. 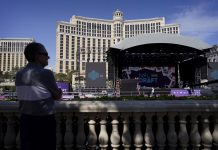