It is goodbye Cleveland Indians and hello Cleveland Guardians. Major League Baseball’s Cleveland ownership has a new brand name and all of the merchandising opportunities will now be available for the 2021 holidays and the 2022 baseball season. Sports owners have dropped names and logos on products that have been deemed offensive such as the NFL’s Washington team name and the Edmonton Canadian Football League team name. Edmonton’s brand is now the Edmonton Elks. The Cleveland ownership’s thinking on its team logo began to evolve years ago. Now the team’s name has been relegated to the dustbin of history. It is not easy to change a brand name in sports say as it was in 1915. There is a process that includes the selling of products.  The new brand name comes complete with the old team colors.

Chief Wahoo, the Cleveland Indians logo, went into semi-retirement after the 2018 season. But the logo was being used less and less over a nine-year period.  Since 2009, baseball consumers in Arizona have not seen the logo during spring training out of respect to the state’s Native American population. The TOPPS trading card company announced in July 2018 that it was dropping both Chief Wahoo and the Atlanta Braves screaming Indian or savage logos from new cards the company was printing including reissues of old baseball cards. Chief Wahoo merchandise remains available in Cleveland for the time being as team ownership did not give up various trademarks. The Cleveland franchise has had numerous names including the Lake Shores, Bluebirds, Bronchos and Naps. Nineteenth century Cleveland teams were called Forest City, Blues, Babes and Spiders. The team was named the Indians in 1915. Chief Wahoo was created as a promotional tool in 1947. The logo and the team name will now become museum pieces. 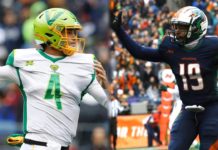 The Battle Over The Cleveland Guardians Name Continues 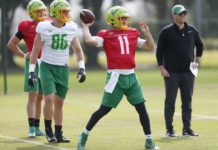