The team will honor the Sugar Kings hoping to draw local interest.

The Miami Marlins baseball franchise has put out a political statement although it is in the form of a uniform that the team players will be wearing in the next few days. May 20th is Cuban Independence Day that is celebrated in South Florida and other places by Cuban exiles but not in Cuba. January 1st is celebrated as Triumph of Revolution Day. It was that day in 1959 when Fidel Castro got control of the government. The Marlins baseball business has a new uniform that has nothing to do with the team’s logo or basic look. The new uniform, which is part of a marketing scheme, resembles the Triple A, International League’s Havana Sugar Kings uniform except there is the name Miami in script across the front of the shirt. But the red color scheme with white strips is that of the Sugar Kings franchise which was unofficially kicked out of Cuba by Castro in 1960 when he decided to nationalize businesses and with the goal of getting rid of American influences in the country. Castro actually did not kick out the minor league baseball team which started playing in Havana in 1946. Baseball Commissioner Ford Frick got enormous pressure from President Dwight Eisenhower’s administration and Secretary of State Christian Herter to get the team out of Havana. On July 8th, 1960 the team moved to Jersey City, New Jersey. The Jersey City Jerseys lasted one and a half years. The team moved to Jacksonville, Florida for the 1962 season.

The Marlins uniform marketing campaign claims it is about blending sports and fashion and that is part of producing revenue. But the Marlins uniform plan is really an attempt to win over the local Cuban community in addition to making some money while not completely examining history. 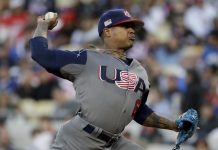 World Baseball Classic to be postponed till 2023 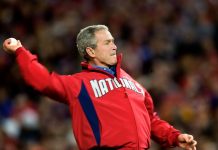 Presidential Impact On Society Through Sports 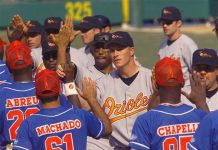 MLB-Cuban Player Deal May Be Hung Up By Politics