The collective bargaining agreement talks could get testy.

Kevin Mather is no longer employed by the Seattle Mariners as the team’s CEO and president but his leaving does not mean all is well with the Mariners business and Major League Baseball. Mather’s comments at the Bellevue Breakfast Rotary Club could cause some major problems when the owners and players’ sides talk about a new collective bargaining agreement. The owners and players deal ends following the season. Mather suggested that the Mariners best minor league prospect Jarred Kelenic probably should start the season in the minor leagues despite the fact that he is more than likely ready to play Major League Baseball. There is just one reason for Kelenic to get a few more minor league at bats. The business of baseball. Kelenic would have a hefty paycheck delayed by a year and play the 2021 season at the Major League minimum salary. Then he would have to play three more seasons to reach the arbitration stage and six more years to hit free agency.

The Chicago Cubs management did that to Kris Bryant in 2015. Chicago sent him to the minor leagues and brought him up to the Major League roster 13 days after the season started which meant Bryant lost a year of service time. Bryant filed a grievance over the manipulation of service time and lost. The new collective bargaining agreement may rectify that situation if the players have their way. The owners want to keep status quo. The baseball industry ultimately has the right to determine when a player is ready to work for a Major League Baseball team. Mather also insulted a couple players ability to speak English and complained about having to pay for an interpreter. Mather has some money invested in the Mariners business. His words won’t help in the collective bargaining talks. 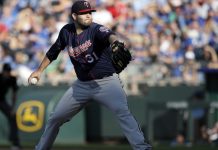 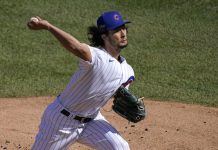 Game 2 of the Marlins and Cubs series will be played today. Miami looks to upset Chicago.