Marlins ‘Everything Must Go Sale’ Continues

Scott Boras made his annual appearance at the Winter Meetings and was asked to espouse on the recently completed Giancarlo Stanton trade and the state of the Marlins franchise. He responded by saying, “We’ve seen one of our major league jewelry stores become a pawn shop.”

The wheeling and dealing for the Marlins continued as the St. Louis Cardinals acquired outfield Marcell Ozuna (pending physical) in exchange for prospects.  According to Bob Nightengale (Twitter) the Marlins will receive more valuable prospect in deal than Giancarlo Stanotn and Dee Gordon trades combined. The package is a combination of pitchers and position players.

According to Jon Heyman (Twitter) one of the pieces coming back to the Marlins is right hander Sandy Alcantara. The Marlins wanted the 22-year old right hander included in the proposed Giancarlo Stanton deal.

Alcantara is rated by MLB Pipeline as the Cardinals 9th best prospect. He opened the season as the #40 ranked prospect by Baseball Prospectus.

He was a September callup and appeared in eight games (all in relief).  Overall, he did not record a decision and pitched to a 4.58 ERA (4-ER/8.1-IP).

News of the trade was first reported by Craig Mish of SiriusXM (Twitter). 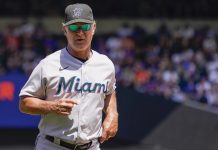