Major League Baseball will celebrate Jackie Robinson Day on April 15th, the 71st anniversary of Robinson making his debut with the Brooklyn Dodgers, with special uniforms, why not make money off of Jackie Robinson with merchandise although the proceeds are going to a Robinson charity. Baseball had an unofficial color barrier that kept Negro players from being on Major League rosters. Moses Fleetwood was the first announced Negro player ever to put on a Major League uniform with Toledo of the American Association in 1884 and also the last Negro player until 62 ½ years later. In 1947, there was still one city, St. Louis where Negroes or colored people could only sit in the right field bleachers. Ralph Kiner who was with Pittsburgh in 1947 cited World War II not Branch Rickey as the reason baseball had to desegregate.

“It was just another part of the changeover of baseball. It had to happen sooner or later. It was really an aftermath of World War II where the black players, or Negroes, fought for our side. They had to be recognized.

There was a movement at the time that they were going to bring black players into the game. Rickey was the man who picked Robinson and that was a brilliant choice.” Kiner was right, there was a movement to integrate baseball. Sam Lacy, a sportswriter with black newspapers began pressing baseball in the 1930s to hire Negro players. Lacy wanted to meet with Commissioner Kennesaw Mountain Landis and was rebuffed. There was a demonstration outside of Yankee Stadium calling for baseball to change policy. Landis died and the new Commissioner Happy Chandler saw no reason for the color barrier. Kiner’s perspective was the war changed some of the thinking by a few baseball owners. Baseball moved slowly though. Boston’s Tom Yawkey finally gave in and had a Negro player on his team in 1959. 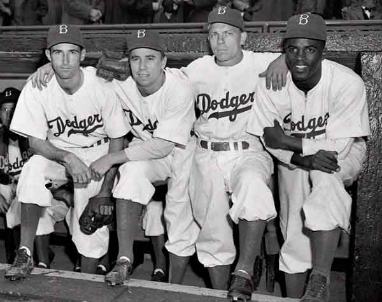