Montreal’s Major League Baseball future could be decided on Sunday.

Sunday is Election Day in Montreal as voters held to the polls to pick a mayor along with a good number of other legislative positions. Montreal voters might also quickening or slow down the process of getting Major League Baseball’s attention with the result of the vote. It is thought if the incumbent Dennis Coderre wins, the road to get municipal money for a baseball park suitable for a major league franchise would be easier. If Valerie Plante wins, it may take four years before it is known if any loonies would be thrown at a baseball stadium. Plante wants Montreal residents to vote on the stadium funding issue in November 2021 when Montreal’s next citywide elections are held. Plante thinks Montreal is a Major League Baseball city but she thinks the opinion of voters should be heard as well. Plante has been attacking Coderre saying the incumbent has been cutting a backroom deal to bring a new version of the Montreal Expos to town. Meanwhile Major League Baseball Commissioner Rob Manfred seems to have expansion on his mind with Montreal, Mexico City and Charlotte three possibilities. Portland, Oregon has surfaced as a possible candidate. Only two will get expansion teams, if Major League Baseball owners go in that direction.

But before adding teams, Manfred and his owners have to solve stadium situations in two places where either bad stadiums or bad leases exist, Oakland and Tampa Bay. The Oakland and Tampa Bay ownerships seem to have identified stadium sites in their markets. In Montreal, the same problems that caused the Montreal Expos franchise to fail still exist. A lack of a state of the art stadium and a weakened Canadian dollar. Mexico City is a total financial unknown. Neither Charlotte nor Portland has a suitable stadium. Major League Baseball expansion is not happening soon. 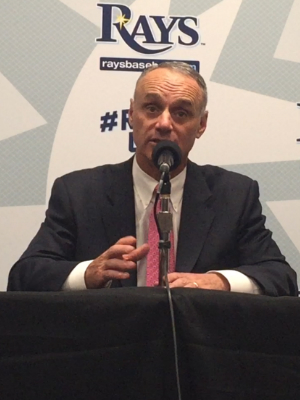 Rob Manfred has been talking up expansion.