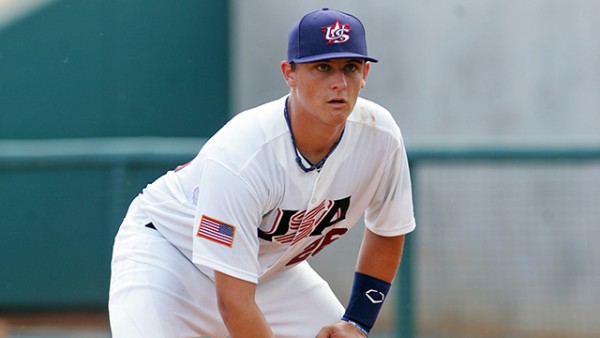 The Tampa Bay Rays wrapped up the first night of the 2015 First-Year Player Draft by taking catcher Chris Betts with the No. 52 overall pick in the second round, but they didn’t expect Betts to still be available.

“This is a guy that we really like, another guy that we’ve scouted, we’ve scouted him for a couple years now,” R.J. Harrison, director of scouting, said after the pick. “I couldn’t of drawn up this first day any better.”

“We like his bat and power, and he’s got a plus arm, and there’s no reason why he can’t catch. Like on any young catcher, there’s a question about ‘Well, is he going to stay behind the plate?’ and blah blah blah, but we feel like this guy has got a great work ethic, he’s a ballplayer.”

Betts was rated by Baseball America as the No. 28 prospect entering Monday night, but he might of fallen to the Rays for multiple reasons.

Betts said that other teams might just not have thought he was good enough, or could have been concerned with his injury, but the Rays were pleasantly surprised to be able to draft him.

“I couldn’t of drawn up this first day any better,” Harrison said.

The injury in question is a forearm strain that he suffered this spring that forced him to strictly DH duties over the final three weeks of the season, but Betts said it’s nothing to be concerned with.

He is currently throwing from 150 feet at 70 percent, but Harrison said “We’ll bring him along slow and get him back to full speed this summer.”

The decision for Chris Betts to DH was likely just for precautionary reasons with the draft approaching, but it might have still been concerning for other teams nonetheless.

Regardless, Betts is, of course, just happy to be drafted.

“I’m just excited to be picked by the Rays… It’s just a fun place to be,” he said. “I’m just extremely happy that I got picked when I did.”

Betts spoke about what he thinks are his strongest traits, most notably his leadership behind the plate.

“As a catcher, defensively, definitely my leadership,” Betts said. “I take a lot of pride in commanding the field and making sure everybody is where they need to be and making the game goes as smoothly as possible. I really enjoy controlling the pitching staff and helping them out throughout the game.”

“Offensively, I’m just very comfortable offensively. I think on any given day my hit tool can be the best tool.”

Betts may or may not be able to stay behind the plate, but we should have a better idea of exactly what he is capable of when he is playing at full strength again.