MLB’s celebration of someone they didn’t really want around.

Major League Baseball is celebrating Jackie Robinson at 100 reliving Robinson’s life with events at the ballpark and elsewhere throughout 2019. Robinson signed with the Brooklyn Dodgers organization after World War II ended in 1945, spent a year playing for the International League’s Montreal Royals and finally made his Brooklyn Dodgers debut on April 15, 1947 breaking what was called the color barrier. Robinson became the first Negro to play Major League Baseball since Moses Fleetwood’s last appearance with the American Association’s Toledo Blue Stockings on September 4, 1884.  Fleetwood would finish his career with the International League’s Syracuse Stars and was released by the team on August 23, 1889. He was the last Negro International League player. There would not be another Negro in that minor league until Robinson made his Montreal debut 57 years later.

As part of the 100th anniversary of Robinson’s birthday, there will be a Jackie Robinson museum opening in New York City in Manhattan and perhaps that is appropriate. Jackie Robinson never finished his career as an employee of the Brooklyn Dodgers. On December 13, 1956, Brooklyn traded Robinson to the Manhattan based New York Giants for Don Littlefield. Robinson appeared in a picture with his family with some Giants gear but was not intending on moving from Brooklyn to upper Manhattan. He was retiring, the trade had nothing to do with the decision. The Dodgers owner Walter O’Malley wanted him gone. Robinson went to work as a vice president for a coffee company. Robinson apparently gave some thought to becoming a manager once his playing days ended. That never happened.  He got involved in the civil rights movement and was critical of Major League Baseball’s for not hiring Negroes to fill management positions. Jackie Robinson never got a job in baseball after he retired. 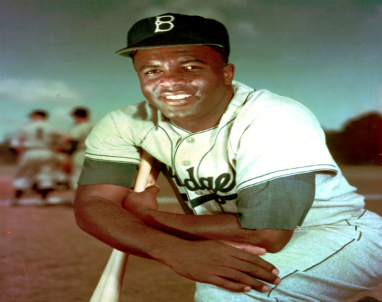