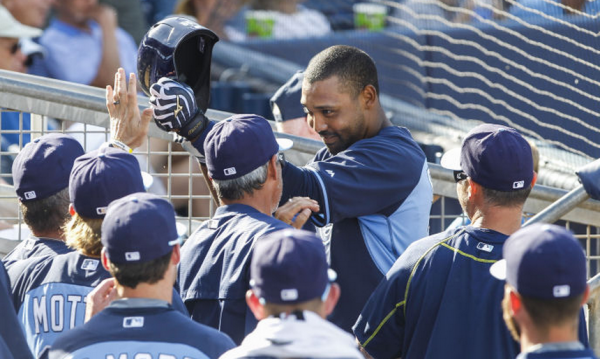 Yesterday the Tampa Bay Rays announced that they had placed Desmond Jennings on the 15-day disabled list with left knee bursitis and purchased the contract of Joey Butler from Triple-A Durham.

For Butler, it was the end of a long journey back to the big leagues.

Butler made his major league debut after spending almost six full seasons in the minors, but after just a combined fourteen games between the Texas Rangers and St. Louis Cardinals he was off to Japan.

The Cardinals sold Butler’s contract to the Orix Buffaloes, where he played just 21 games last season.

Heading into this season, Joey Butler was eager to get back to the big leagues and he chose the Rays for that very reason. Not only did the Rays tell him they thought he had a pretty good chance at making an impact at the major league level for them, but there is also some sort of familiarity with manager Kevin Cash.

After all, Butler and Cash played together in Triple-A in the Texas Rangers organization back in 2010.

As far as how he found out about the promotion this time around, Butler said Jared Sandberg told him while the team was together watching the Floyd Mayweather vs. Manny Pacquiao fight Saturday evening.

“We were all there as a team. He just walked over there and told me what was going on.”

What’s interesting, though, is that Butler decided against telling his teammates that he had been promoted to the big leagues.

“I prefer not to tell anybody. I’m not too big on having the spotlight on me,” Butler said. “I just let everybody enjoy the fight and I’m sure they know by now.”

“Yeah well that was the goal of the whole day, to be with the guys and watch the fight and have a little fun. So mission accomplished and now I’m here.”

Joey Butler did say that he’s excited to be back in the majors with the Rays, though, and he’s hopeful he can make an impact.

“It feels good. Im excited,” Butler said. “I feel like I’ve gained a little more experience than I’ve had before. I’m excited to see how things play out.”

Butler said he isn’t one to let how he plays affect his game, he’s just going to go out there and play his best and try to have fun while doing it.

“I don’t try to look at how good things or how bad things are going. I just try to go out and have fun, play my best for them and it’ll all take care of itself.”

In his time with the Rays, the plan is to rotate him in mostly against left-handed pitching both in left field and at the DH position.

Hear what else Butler had to say about his promotion prior to Sunday’s game below: