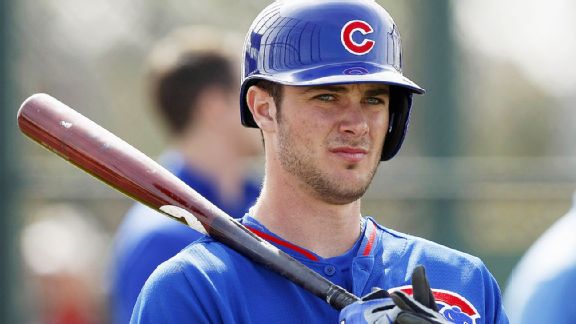 Kris Bryant had a Chicago Cubs-like start to his major league career.

Called up one day after the team ensured he can’t be eligible for free agency until after the 2021 season, Bryant struck out on three pitches against James Shields in the first inning of Friday’s game against San Diego.

The Cubs, seeking their first World Series title in 107 years, selected Bryant’s contract from Triple-A Iowa and immediately inserted him into their starting lineup as the cleanup hitter and third baseman.

In the top of the first, Bryant cleanly handled Derek Norris’ sharp grounder, starting a 5-4-3 double play. Following a two-out walk to Anthony Rizzo in the bottom of the inning, was given a standing ovation as many fans took photos.

With the crowd still on its feet, Bryant swung through three pitches to strike out and end the first. He foul-tipped an 89 mph cutter on the low, outside corner, then swung over a pair of changeups.

Bryant’s father watched from the stands next to his son’s agent, Scott Boras. Kris Bryant said he got only three hours of sleep before Friday’s game.

“Time of my life really,” he said. “Can’t really put into words how good of a feeling this is to work for this your whole life and finally get that chance.”

Friday is Day 13 of the season, which means Bryant could at most accumulate 171 days of major league service. Because 172 days of service count as a year, he could have been eligible for free agency after the 2020 season had he been on the big league roster earlier.

“I said my expectations are that you play hard and enjoy yourself,” manager Joe Maddon said.

When Bryant was sent to the minor leagues on March 30, players’ union head Tony Clark said “this decision and other similar decisions made by clubs will be addressed in litigation, bargaining or both.” After Bryant was brought up Friday, Clark said in an email to The Associated Press: “nothing new to offer at this point.”

Chicago third baseman Mike Olt was put on the disabled list Friday with a broken right wrist, a move retroactive to Wednesday. Cubs president of baseball operations Theo Epstein said Bryant would not have been called up if Olt had been able to play.

Epstein said the Cubs would have preferred Bryant’s debut to come on the road.

“We would have done it a little bit later,” Epstein said, “but you can’t script everything out in baseball.”

Bryant, selected by the Cubs with the second overall pick in the 2013 amateur draft, joins a young core that includes Jorge Soler, Anthony Rizzo and Starlin Castro.

“I think the journey’s just starting. This isn’t where I want to end. I want to win a lot of games and win for the Cubs,” Bryant said. “I think this is a good starting point.”

Chicago also placed reliever Neil Ramirez on the disabled list with right shoulder inflammation, a move retroactive to Thursday, and activated outfielder Chris Denorfia from the disabled list following his recovery from a strained left hamstring.