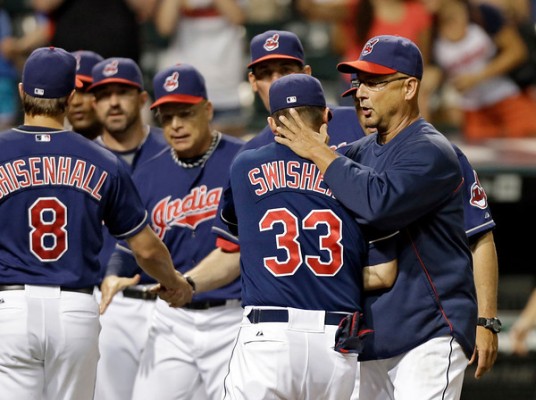 The Cleveland Indians say outfielder Nick Swisher and infielder Zach Walters will start the season on the disabled list.

Coming back from knee surgery, Swisher played his first game of the big league exhibition season on Wednesday as a designated hitter. Walters has a strained oblique muscle.

Cleveland Indians​ Nick Swisher will begin the 2015 season on the disabled list. http://t.co/dBTjAdoVSx

The Indians also announced reliever Austin Adams will make the opening-day roster. Adams, who pitched in six games over three stints with the Indians last year, earned a spot in an eight-man bullpen.

“Eight pitchers can set up our staff for a week,” manager Terry Francona said. “It allows us to go with a short bench, when games get spread out, having an extra arm helps a lot.”

Adams was selected by the Indians on the fifth round of the 2009 amateur draft.

“Austin has a big arm,” Francona said. “He is working diligently on his breaking ball.”

“Sitting isn’t going to help him,” Francona said. He needs to go play. It wasn’t what he wanted to hear but it will be good for him to play.”

Rays Spring Training Primer: What To Do With Luis Patino