The Walt Disney Company is bringing back Roseanne,

The rebooted television show Roseanne is on Disney-ABC’s schedule starring Roseanne Barr who goes by just one name, Roseanne. Normally a relaunch of a television show that ended 21 years ago would have nothing to do with politics or sports for that matter. But on July 25, 1990 Roseanne performed the National Anthem prior to a Cincinnati Reds, San Diego Padres game in San Diego which got some unwanted attention. Roseanne was trying to break out a singing career and someone thought it would be a good promotion having the star of a hit television show that happened to be produced by one of the Padres owners, Tom Werner. perform. It ended up being a disaster. Roseanne was a comedian when she didn’t try to sing or star in a TV comedy. She performed poorly which happens to some national anthem singers, singing loudly and screeching. But she also mimicked players by spitting and grabbing at her crotch as if she was adjusting her jockstrap. By the time she was finished, it seemed her career had crashed.

Roseanne was accused of disrespecting the Star Spangled Banner and the flag. President George Bush said the performance was disgraceful. Columnist George Will called her a slob and somehow equated the performance with the Japanese attack on Pearl Harbor on December 7, 1941. Roseanne claimed she was bringing some humor into the song.  While she was signaled out for criticism, the performance didn’t hurt her career. The show would last another seven years and Roseanne would win an Emmy, Golden Globe, the Kids Choice Award and three American Comedy Awards and would become the second highest paid women performer in TV by 1995. The show ended in 1997. Tom Werner is now a Boston Red Sox and Liverpool FC co-owner. A president never called for Roseanne’s firing. It was a different political climate. 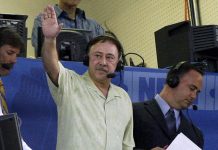