Even in hot streak, the Yankees could play better

The New York Yankees are red hot and back in first place in the difficult AL East.  The Bronx Bombers are on fire, and at times they seem unstoppable.  Tom Hanslin of BronxPinstripes.com joined the Erik Kuselias Show on Tuesday morning to discuss how the Yankees could be even better than this.

Sonny Gray has struggled in the New York rotation, and not everybody in the mighty Yankee lineup is hitting their expectations.  Even though the Yankees have been so good over the past 25 games, Hanslin suggests they could be even better, at least on paper.

Of course, there is a lot of baseball to be played, and the Yankees are heading out on an eight-game road trip.  Erik asks Tom if there are any cracks in the Yankee armor, and if there are any signs that things might not be ideal.

Tom Hanslin is not alone in suggesting the Yankees are not playing their ideal game of baseball.  Manager Aaron Boone doesn’t think the team is firing on all cylinders just yet, and has said so in press conferences.

The Yankees are not the only team out to a good start in the AL East, and it looks to be another year of a close race between New York and their rival Boston Red Sox.  Hanslin believes it can come down to who is playing on the home field when the two teams meet.  With series that are often down to the wire, that little edge can be all the difference between the Yankees and the Red Sox. 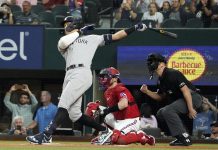