Rays Hang On To Win, Take Series With Oakland

C.J. Cron and Willy Adames each homered as the Tampa Bay Rays defeated the Oakland Athletics 5-4.

Andrew Kittredge (3-2, 6.37ERA) picks up the win for the second straight day and Tampa Bay improves to 16 games over .500 at 82-66. After giving up a grand slam to Khris Davis on his first pitch,  Sergio Romo settle down and got the final two outs in the ninth to pick up his 21st save of the season.

Tampa Bay improves to 48-26 at home for the season. Overall, they have won 11 of their last 14 games outscoring the opposition 79-47 during that stretch.  The victory clinches the Rays first winning record since 2013 (92-71).

The Rays are 20-5 since August 19th, the best winning percentage in baseball and 32-19 since the All-Star break. With the win today the Rays guarantee themselves of their first winning season since 2013.

For the second time in the series, the Rays turned to Diego Castillo as the opener. On Friday night he retired all six batters he faced, including striking out four.  Today, he retired all three batters he faced including two more strikeouts. He is 1-1 with a 2.16 ERA (6-ER/25-IP) over his last 17 appearances (8 starts). He had allowed nine runs over his previous 5 appearances (July 15 through 29).

Andrew Kittredge, working for the third time in the series, followed Castillo to the mound in the second tasked with holding the 2-0 lead. He worked two innings, facing the minimum thanks to a double play ball. His last eight appearances (7.1-IP) have been scoreless. In that span, he’s allowed four hits while striking out eight.

Jaime Schultz entered the game in the sixth inning. He had also worked on Friday and was the losing pitcher after allowing a lead off homer to Khris Davis in the 10th inning.  Following the homer he retired the next three A’s in order.  He retired all six batter he faced in working two scoreless innings.

Adam Kolarek worked the eighth inning. He allowed a leadoff single to Matt Olson but he was retired via the double play.  He allowed  a 2-out double to Ramón Laureano but escaped damage by getting Marcus Semien to ground back to the mound for the final out.

Jake Faria came in the 9th inning. It’s his first game action since working three innings against the Toronto Blue Jays on September 5th. He walked the bases loaded before being lifted for Jose Alvarado.

Alvarado struck out Jed Lowrie for the first out of the inning and turned it over to Sergio Romo.

Romo’s first pitch to Khris Davis was launched into the left field stands for a Grand Slam to cut the Rays lead to 5-4. He then stuck out Matt Olson and retired Stephen Piscotty on a fly out to right to end the game.

HOME RUN: @CCron24 erupts for a 2-run homer in the 1st inning to score Ji-Man Choi, and make it 2-0 against the Oakland Athletics! 🚀

With one out in the first, Mike Fiers hit Matt Duffy bringing Ji-Man Choi to the plate. Choi hit a groundball to second that should have been a standard inning ending double play ball, but Lowrie bobbled it and only got the force out at second. As it so often happens in baseball, the failure to turn the double play hurt the A’s, as C.J. Cron belted his 27th homer to give the Rays a 2-0 lead.

Cron had been hitless in his previous 12 at bats including striking out six times in the stretch. Hes only started 21 of the last 40 games and 51 games since the All-Star break compared to 85 of 96 games in the first half.

MUST SEE: @willya02 launches a solo homer in the 4th inning to keep @RaysBaseball in the lead 3-0 against the Oakland Athletics! ☄️

Willy Adames worked a full count against Mike Fiers with 1-out in the fourth before launching his ninth homer of the season. It was a laser beam to left travelling 420 feet with an exit velocity of 110 miles per hour and a launch angle of 29 degrees.

With runners on the corners and 2-out  in the seventh inning, Brandon Lowe tripled in the right field corner scoring Duffy from third and pinch runner Carlos Gomez all the way from first to give the Rays a 5-0 lead.

Tampa Bay loaded the bases in the bottom on an infield single by Kevin Kiermaier and back-to-back walks to Willy Adames and Jake Bauers. Jesus Sucre lined to first baseman Matt Olson who doubled off Adames at second.  Mallex Smith drew a two out walk to reload the bases for Matt Duffy who grounded out to short to end the inning 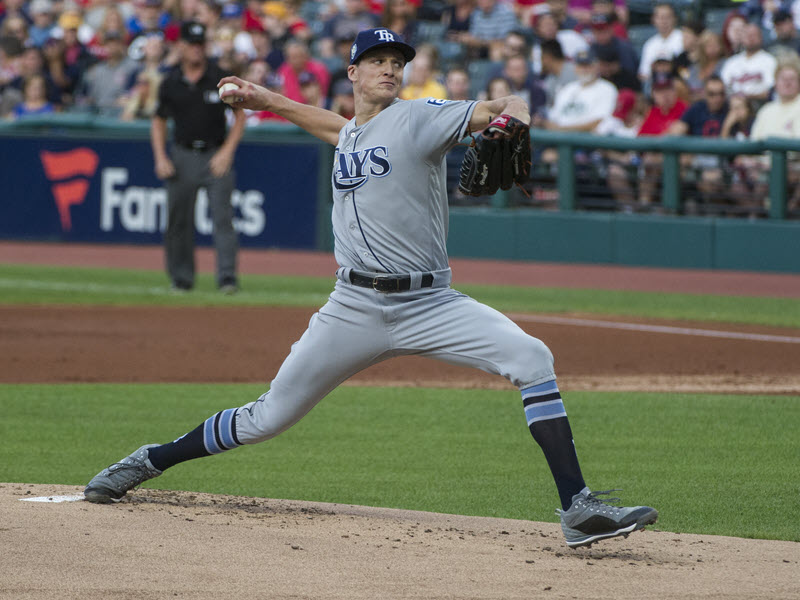 Tampa Bay heads to Texas to take on the Rangers in a three game series beginning Monday night at 8:05.  Tampa Bay will send Tyler Glasnow (1-6, 4.48 ERA) to the mound. Texas counters with right-hander Adrian Simpson (0-1, 5.06 ERA).