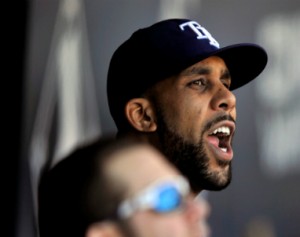 Today marks David Price’s first start in Chicago since he had his run in with home plate umpire Tom Hallion nearly one year ago to the day.

The on-field argument over a very questionable ball two call led to the ejection of the soft-spoken Jeremy Hellickson.

Things got much uglier after the game when David Price accused Hallion of cursing at him which resulted in Hallion calling Price a liar.

Price is still waiting for an apology and told Marc Topkin of the Tampa Bay Times that “It doesn’t affect me, I have no respect for him.”

In recent years the relationship between managers/players and umpires seemed to be becoming more contentious with the new breed of umpire seemed to have a shorter fuse and a desire to be more assertive.

One could argue that an umpire should not have to put up with brow beating by an opposing manager or showed up by a player and that everyone on the diamond has emotions but umpires used to be held to a higher standards.

Back in the 1940’s each league commissioner would deliver a pamphlet to the umpires of their league stating what calls to stress, receive instruction on any rule changes, and in the case of National League President Ford Frick a code of ethics which he deemed the Ten Commandments was included.

As Joe Smith of the Tampa Bay Times wrote in his piece Replay taking hostility out of manager-umpire relationship instant replay has served to soften some of the disputes between the player/manager and umpires. Rest assured there are still going to be plenty of instances over a long summer when a player is upset by a failed strike call, a manager fumes over the lack of a called check swing strike, or a hitter is upset over a disputed strike call. These are just some instances not covered by instant replay that may cause the two parties involved to become irate at one another.

It is these instances where it would be refreshing to see the umpires adhere to the Ten Commandments rather than act as they have over the last several years by confronting players, following them to the dugout after an inning, or openly mock their actions to incite them.

2 – Keep all personalities out of your work. You must be able to forget and forgive.

3 – Avoid sarcasm. Don’t insist on the last word. If after an argument the player is walking away let him go!

4 – Never charge a player, of follow him if he’s moving away – and above all no pointing your finger and yelling.

5 – As concerns umpiring, there is a very old adage and a wise one – “Hear only the things you should hear – be deaf to the others.”

6 – Keep your  temper. A decision or an action made in anger is not a sound one.

7 – Watch your language. For an umpire to use, toward a player or manager, language which if used toward the umpire would result in the player being disciplined – cannot be condoned.

8 – Take pride in your work and the position you hold and conduct yourself accordingly at all times. Remember respect for an umpire is created off the field as well as on.

9 – Review your work after every game. You will find if you’re honest with yourself that 99 percent of all problems is traceable to loafing.

10 – No matter what your opinion of another umpire, never make any adverse comment about him either ON or OFF the field.  To do so is more of a breach of ethics. It is despicable and ungentlemanly.

And remember always on the field you officially represent baseball. Its dignity, its integrity, its well-being are in your hands. And baseball is too great a game to permit personal pique, indifference, petty jealousy, and rowdyism.