Takeaways from a Tuesday night defeat

The Tampa Bay Rays’ season-long winning streak is over at one, having fallen to the Texas Rangers 7-2 the night after an emphatic 8-4 victory.  It was a masterful start by former Ray Matt Moore, who rebounded from three rough starts to have his best outing of the 2018 season.  Shin-Soo Choo walked twice, sacrificed a run in, and homered to lead the Rangers in the victory.

Notes from the Rays’ loss:

–Yonny Chirinos looked good.  He had a frustrating first two innings, with people reaching base on errors, infield hits, and seeing-eye singles.  Runs came around to score in the first and second innings—the first two earned runs of Chirinos’ career—but the rookie looked poised beyond his years in bouncing back and calming matters down.  Damage was limited in both innings, when many rookies would have started to fall apart, and the Rays’ starter calmed down considerably after that, throwing nineteen pitches across the next two full innings.

“He’s young, he’s allowed to have a little hiccup there,” said manager Kevin Cash of Chirinos’ effort..  “Obviously it wasn’t his best…performance of the year.  He’ll bounce back for us.”

“In theory we now have him built up.  Depending on what route we take with a fourth starter or not, he’s capable of going every five days for 100+ pitches.”  The Rays continue to not commit to bringing an eventual end to their three-man rotation experiment, but Chirinos as a starter is a long-term goal.

What does it all mean?  It could have been worse, with those first two innings the type that get many young pitchers to melt down, getting in their own heads.  Chirinos did well to get out of those innings and get two quick innings under his belt.  In the fifth, walks caught up with him in a big way, and Guzman got a hold of his double.  It shows that Chirinos still has a while to go before he’s where he needs to be.  It was a Murphy’s Law kind of night for the Rays’ starter.

Bottom line:  Chirinos was asked to get through a starter’s workload on Tuesday night and he did that.  The line looks a little rough, but Chirinos showed some toughness and learned quite a bit about being a big league starter

-Matt Moore made his return to St. Petersburg, his first since being traded to the Giants.  It turned out to be Moore’s best start of the season.  Moore came in with an 0-3 record, for those who still believe wins and losses in a team sport should be put on one person’s head.  More importantly, Matt Moore was also sporting a 8.76 ERA coming into the contest.

Tuesday night was his longest start of 2018 and his best.  He looked sharp, like the high end prospect he once was and the promising young MLB pitcher he once was.  Much like the Tampa Bay Rays, the Texas Rangers are injured and scuffling in the early going of what looks to be a long, long baseball season.  Moore coming through with a few good starts can help ease Rangers fans’ pain a bit.

–Carlos Gomez continues to look flat-out bad at the dish.  Gomez popped up in the first, and showed the frustration that is probably not helping his poor numbers.  He slammed his bat on home plate after popping up like the plate was at fault.

Gomez then proceeded to strike out in both the third and sixth innings.  He has one hit in his last twenty-two at bats.

-Choo’s home run hit the D-ring catwalk over the right field fence.  The launch was the second D-ring homer in as many days.

–Daniel Robertson played like a leadoff hitter in the absence of Matt Duffy. In all four of his plate appearances, he saw five or more pitches.  Working the count is an underrated quality in a leadoff hitter, and Robertson showed the patience and tenacity necessary to do the job.  Two walks and a run scored didn’t hurt that perception at all.

-Duffy’s hamstring tightness has landed him on the disabled list for at least ten days.  The Rays made that announcement today, calling up Brandon Snyder in his place to take over at the hot corner.

–Brandon Snyder saw his first MLB action since 2016, getting the call to replace the injured Matt Duffy at third base.  The 31 year-old journeyman had played just 120 games across parts of five different seasons coming into Tuesday night’s game.  He played all of 2017 in the Washington Nationals’ minor league system.  Snyder was 0-4 with a pair of strikeouts in his 2018 debut.

–Alex Colome took the ninth inning.  The Rays’ closer pitched serviceably in his one inning of work.  He produced two groundouts, a single, and a strikeout.  It wasn’t a save situation, more along the lines of mop-up work, but a relatively easy inning is welcome news for a pitcher who needs to find his groove soon. 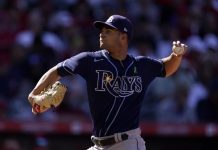 Agency clears way for a new Oakland Athletics stadium on the Waterfront a $12B complex.