HOUSTON (AP) — C.J. Cron homered early and Wilson Ramos hit a tiebreaking RBI single in the eighth inning to lift the Tampa Bay Rays to a 2-1 win on Tuesday night to snap a 12-game winning streak by the Houston Astros.

Blake Snell (9-4) allowed just three hits and one run in seven innings, but had to pitch around a career-high seven walks for his fifth straight win. Sergio Romo pitched for the third straight game, taking over with one out in the ninth and allowing one hit for his third save a night after blowing the save in Houston’s 5-4 win.

Matt Duffy doubled to start the eighth and advanced to third on a groundout by Jake Bauers. The Rays took a 2-1 lead when the single by Ramos sailed just over the head of a leaping Yuli Gurriel and into left field to allow Duffy to score.

Cron snapped a career-long 0 for 23 slump with a solo homer with one out in the second inning to give Tampa Bay a 1-0 lead. It was the first hit since June 12 for Cron, who struck out 18 times during his hitless streak.

The Astros went 1 for 6 with runners in scoring position to come up one victory shy of setting the franchise record for longest winning streak in franchise history.

The Astros had plenty of opportunities to score, but came up short again and again. They loaded the bases with one out in the first inning, but Carlos Gomez caught a fly ball hit by Evan Gattis and his throw home was in time to leave George Springer out at home to end the inning.

Springer was on second base with one out in the third inning when Bregman singled to send him home and tie it at 1-1. Bregman tried to stretch the hit into a double, but Gomez made a perfect throw from right field to leave him out at second.

Snell struck out the side in the fourth, capped by a three-pitch strikeout of Marwin Gonzalez that led to his ejection. Gonzalez argued with home plate umpire Pat Hoberg before throwing his bat and helmet and being tossed. He kept barking at Hoberg after the ejection and continued yelling at him until third base coach Gary Pettis pulled him away and pushed him toward the dugout.

Snell walked Alex Bregman and Carlos Correa with no outs in the sixth. But Gurriel grounded into a double play and Snell retired Tony Kemp after intentionally walking Gattis to leave Houston empty-handed.

Adeiny Hechavarria doubled with two outs in the seventh inning to chase Verlander. Hector Rondon took over and retired Kevin Kiermaier to end the inning. Kiermaier went 0 for 5 in his return after sitting out since April 15 after tearing a ligament in his right thumb which required surgery.

The Astros had a runner on first base with two outs in the seventh when Springer hit a long fly ball to right-center that Kiermaier nabbed as he leapt on the warning track before crashing into the wall of the bullpen.

Astros: RHP Joe Smith (right elbow inflammation) felt good after playing catch on Tuesday but likely won’t return from the disabled list until Houston’s next homestand, which begins on July 5.

Tampa Bay’s Nathan Eovaldi (8-4, 2.58 ERA) opposes Houston’s Charlie Morton (8-1, 2.94) in the series finale on Wednesday night. Eovaldi, who grew up in suburban Houston, is 1-0 with a 2.52 ERA in four career starts against the Astros. Morton struck out nine in six innings of a win over Kansas City in his last start.

By Kristie Rieken of the Associated Press. 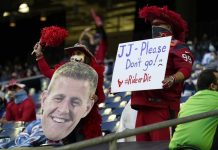