Major League Baseball owners may have locked out its employees, the players, and removed its employees’ images from the various websites that MLB runs but that doesn’t mean that the business of Major League Baseball has stopped. The year 2028 seems far in the future but for the Tampa Bay Rays’ ownership, it is around the corner. The Rays’ ownership lease with St. Petersburg is done in six seasons and time is beginning to grow short in the planning and eventual construction of a new ballpark for the 2028 season. It takes a number of years to get money and then build a stadium. It would also be helpful if there was a plot of land available for a stadium in Tampa or St. Petersburg and it would be additionally helpful if those who will be financial-partners knew if the team planned to play 41 or 81 home games annually. 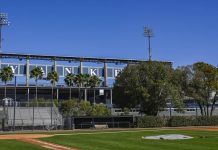