Tim Beckham enters his 6th season as a professional ballplayer as just another player trying to cut out a path to the major leagues.  Baseball America no longer includes him on their Top 100 Prospect List and he ranks as the 8th best prospect in the Rays organization. Although he may not be the future everyday shortstop for the Rays he is still only 23 years old and his best baseball may still be in front of him. 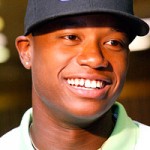 The Road Through The Minors:

After signing his contract he reported to Princeton of the Appalachian League and ended the year with Hudson Valley in the New York Penn League.  Since then he’s climbed the Rays organizational ladder spending 2009 in Single-A Bowling Green,  High-A Port Charlotte in 2010, and split time with Double-A Montgomery and Triple-A Durham 2011. He began the 2012 season in Triple-A Durham but two weeks into the season he was hit with a 50-game suspension after failing a drug test. Overall the 2012 season was a step back for his development and he is looking to make adjustments in 2013.

Despite an improving fielding percentage each year through the minors the Rays had moved him to 2b with the emergence of Hak Ju Lee at shortstop but after Lee suffered a season ending knee injury in late April Beckham moved back to his natural position of shortstop where he now once again plays most of his games.

In a limited number of plate appearances this season he has struggled against left handed pitching hitting .195 (8 for 41). This is a trend that has continued from 2012 when he hit only .209 (19 for 91) against southpaws.

The struggles against left handed pitching may smooth themselves out as he develops consistency at the plate and the sample size grows and the home/road splits may be a function of a hitter friendly environment.

The first video below is from the 2011 season and the bat is held over his head and has a little gyrating motion prior to the pitch. When addressing the ball he has a little leg kick.

The next video is from 2012 and we can see he has dropped his hands a bit and the pre-pitch gyration of the bat is gone.

This season the hands are in lower position and when he strikes the ball he has eliminated the high leg kick in exchange for just a small toe tap.

Next season will be the biggest of Beckham’s career to-date. He’ll be on the 40-man roster and one step from reaching the majors; he should receive a cup of coffee in September if nothing else. Who knows. Should the new mechanics take, Beckham might force his way to the majors before September.

The 2013 season is two months old and he appears to be putting together a nice body of work but as luck would have it he’s going to have to wait to get his opportunity.  Several factors are now in his way of advancing to the big league club. The Rays offense has been one of the bigger surprises of the 2013 season, they have plenty of options at shortstop and 2nd base, and if an injury to a position player were to strike the team Wil Myers would be the first to get the call.

All he can do at this point is to continue to play at the same level he did in the month of May and allow his stock to rise. His best baseball may still be in front of  him.