Sports Talk Florida – N
Listen Now WHBO AM 1040
Listen Now WWBA AM 820
Home MLB Rays Revamp Their Roster, But They Didn’t Have To Did They?
Facebook
Twitter
Pinterest
WhatsApp

Rays Overhaul Roster But They Didn’t Have To 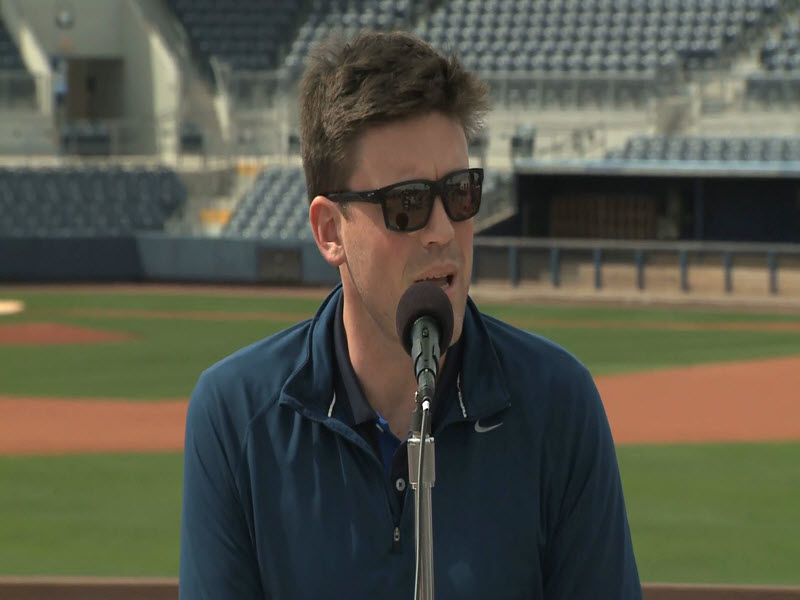 The Tampa Bay Rays overhauled their roster over the winter, but they didn’t have to. Players understand that it’s a business, but that doesn’t mean that current players have to be happy about seeing their teammates shipped off. Departing players often leave the Rays and note that although it’s a business, they feel for the fans.

Fans get attached to players. The name on the back of the jersey is often the reason for their patronage at the park. The reason they tune in to the broadcast. Name recognition is the heart of fandom.

Fans don’t want the yearly roster shuffle. They don’t care about soon to be expiring contracts.

Fans don’t bog themselves down on the realities of the market. They care about “winning today”.

Rather than examine the Rays as a franchise in flux. Discuss the reasons why they did what they did, let’s take a moment to examine if they had to make the moves at all. In the end, the fans want a team that is an improvement over the 80-win team of 2017. Did the front office provide that, from the on-paper view, probably not.

As stated before, the Rays rebuilt the roster over the winter, but they didn’t have to.  They could have kept Jake Odorizzi and ditched the “Johnny Bullpen” experiment. A rotation of Chris Archer, Blake Snell, Jake Odorizzi, Nathan Eovaldi, and Jake Faria certainly is one that fans can point to with more certainty than one that contains the name “Johnny Bullpen”.

Jermaine Palacios, the only player the Rays received from the Minnesota Twins in exchange for Odorizzi, is just 21 years old.  He has yet to play above Class-A baseball. He also can not be found on anyone’s Top 100 Prospect list. Even the most optimistic scout would be hard pressed to say with certainty that he will become a big leaguer

Trading The Face of the Franchise:

The Rays didn’t have to trade Evan Longoria, the face of the franchise. A gold glove defender and a solid, if not spectacular, bat in years past. With him manning the hot corner, Matt Duffy could have moved to second base.  Brad Miller would still be a nice left handed complement to Duffy at second and log time at first base.

The main piece in the Longoria deal with the Giants is Brooksville native Christian Arroyo. He saw his prospect stock rise last year blistering the ball in Triple-A in 25 games (1.065 OPS) before being promoted and struggling in his first taste of big league ball with the Giants. He appeared in 34 games (.548 OPS) before an injury to his hand ended his season.

Tampa native Denard Span was included in the deal to off-set some of the $88MM owed to Longoria (the Rays added an additional $14.5MM in cash payouts). From the Giants side of the deal, removing the average annual value (AAV) on Span’s deal allowed them to stay under the competitive balance tax (CBT) threshold. The Giants would have been unable to sign a Mike Moustakas or Todd Frazier to a deal with Span on the roster because the combination of AAV’s would put them over the CBT.

The Rays didn’t have to deal 2017 All-Star Corey Dickerson.  As noted above, it could be argued that by not trading Longoria, the team wouldn’t have Denard Span and Dickerson would be a Ray. An outfield of Dickerson, Kiermaier and Souza is a very good base while Mallex Smith could still have gotten reps in left-field with Dickerson at DH.

The optics surrounding the Dickerson deal were not ideal. The Rays were unable to find a trade partner all winter but had plenty of dialogue. To get the process expedited, the Rays designated him for assignment.

The DFA put his career in limbo. Would he be traded? Teams have seven days to trade or place a player’s on waivers after being designated. Would he have to uproot his life to switch from training in Florida to Arizona?  Normally, these trades and manuevers happen over the winter which eliminated the discomforting variables noted.

Unfortunately, thanks to the slow moving market, Dickerson was already in camp in Port Charlotte. It was a trying time for Dickerson as his wife was due to give birth any day. He also was set to make $5.95MM in salary for 2018. If he was released he’d only receive 45-days termination pay. His future would depend on finding a team on the free agent market. As stated above, the optics on this were awful.

Fortunately for Dickerson, the Rays found a trade partner in the Pittsburgh Pirates. This meant he’d still train in Florida, up the road in Bradenton. As long as he’s not released by Pittsburgh, his $5.95MM remains intact.

“We knew at some point with some of the left-handed hitting outfielders we had that something was likely going to have to give there.” Rays Vice President of Baseball Operations and General Manager Erik Neander said. “With the market and how many guys were out there we felt the best way to try and accomplish something was to put a timer on it and expedite the process” Adding that the move was “exceptionally difficult” and “something frankly Corey didn’t deserve in that way.”

Hudson is coming off a poor season and isn’t guaranteed a spot in the pen. If he is to make the team, it’s unknown how effective he will be. Gray, drafted in the 13th round last year, hasn’t played above Class-A. He played just 53-games in low-A last year. He is years away from helping the Rays on the field, if he makes it to the MLB level. 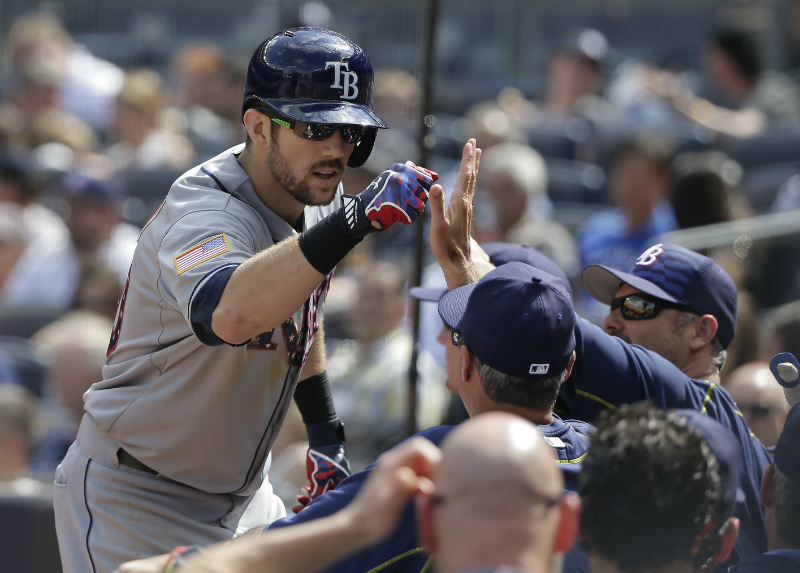 The Rays certainly didn’t have to trade Steven Souza Jr. Neither prospect they got in return will impact at the big league level the way that Souza would have in 2018 or 2019. Who knows what 2020 will bring.

Anthony Banda still needs to learn to harness his powerful arsenal as well as work on his secondary offerings. If that transition doesn’t work, it may be time to look for a role in the pen.

Nick Solak is a nice prospect who carries a good bat but he’s without a true position and has played just 30-games at the Double-A level. The two additional prospects may have higher ceilings then Bonda or Solak, but they still are unknown but will be years away from impacting the Rays at the MLB level.

Brad Boxberger didn’t need to be traded to the Arizona Diamondbacks.  Even though injuries had limited to just 57 games (53.2-innings) over the past two years, when healthy he is an effective reliever. If his injury history is behind him he could have been a viable late inning option in the back of the bullpen.

In exchange the Rays received minor leaguer Curtis Taylor.  Taylor, 22, was drafted in the fourth round of the 2016 draft. He has been unable to stay healthy in his first two professional seasons and has yet to pitch above the Class-A level.

The back of the pen could have included Colome, Romo, and Boxberger. Not a bad place to start building backwards.

Lack of Spending In Free Agency:

This gets exhausting. It should be noted that the Rays have never been big spenders in the free agent market, but this is by choice. Again, fans don’t care about market restrictions, and why should they?

Free agency was slow this off-season but as usual fans of the Rays had to watch their free agents sign lucrative deals elsewhere. Alex Cobb, Logan Morrison, Steve Cishek, and Tommy Hunter all found new homes. From reports, none received an offer from the Rays.

The Rays did re-sign free agent Sergio Romo and outfielder Carlos Gomez. Surely, in a season where the price of free agents plummeted to the normal Rays bargain basement prices they would have been more active?

What Could Have Been:

The Rays have never been, and probably never will be, the team that on-paper can compete with the upper echelon teams of the AL East.  When composing a position-by-position comparison, they will always be the David to the Goliath’s.

This is understood by most everyone, but could the Rays have done more this off-season than they did? Provided the fans with a more stable cast of characters that are well known already? Could they have put out a roster that one could argue could compete with the tier of teams below the Astros, Red Sox, Yankees, and Indians?

Carlos Gomez, Kevin Kiermaier, and Steven Souza Jr. with Mallex Smith as the fourth outfielder. Corey Dickerson at DH with an occasional time in the outfield mix.

A bench with Jesus Sucre, Brad Miller, Daniel Robertson. Could be from outside the organization via free agency or minor trade.