Major League Baseball returns for the first time since 1890.

Major League Baseball will finally play some games in Buffalo, New York as the city will house a portion of the Toronto Blue Jays home schedule. It is a temporary situation caused by the Canadian government which said no to an MLB and Blue Jays ownership COVID-19 protocol plan to play home games in Toronto. The Canadian government had concerns about Blue Jays players and staff flying in and out of Toronto because of COVID-19. Buffalo had two chances at landing a Major League Baseball expansion team. One was in 1968 and the other in the early 1990s. Buffalo was passed over twice. Buffalo did have a National League team between 1879 and 1885. Buffalo had a team in the 1890 Players League and in the Federal League’s two years of existence in 1914 and 1915.

At one time Buffalo was a very wealthy city because of the Erie Canal and shipping. In 1900, the city had the wherewithal to have a successful Major League Baseball team. The Western League was about ready to evolve into the American League and claim major league status. Ban Johnson who ran the enterprise looked at the Buffalo market and decided Buffalo did not fit in his business plan. In 1967, Kansas City A’s owner Charles Finley moved his team to Oakland which prompted Congress to think about reviewing Major League Baseball’s antitrust business exemption. The Lords of Baseball decided to expand by four teams. The National League granted franchises to San Diego and Montreal but there was a stadium issue in Montreal. Buffalo might have been in line to get the franchise if Montreal’s stadium situation could not be worked out. Montreal did get a stadium. Buffalo struck out in a 1991 expansion bid. The Buffalo of today is too small a market for MLB. 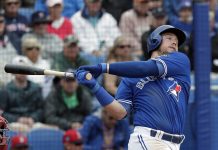