Team is not moving to Nashville

Major League Baseball’s Baltimore Orioles franchise is not moving out of Maryland, at least not until after the 2023 season at the earliest. The franchise’s owner, the Angelos family, and the Maryland Stadium Authority have agreed to extend their relationship for another two years and are said to be working on a longer-term deal. In June 2018, Baltimore Sun writer Peter Schmuck had a column about the long-term future of the team and whether that franchise could be on the move. Schmuck did not suggest the franchise would relocate but he had heard whispers that the team could leave. The Baltimore Orioles leaving tale surfaced again in 2019. An outfit called the Baltimore Post-Examiner had a story about the team moving to Nashville in 2022 unless a local buyer stepped up and purchased the team from the Angelos family. At the time, the Orioles-Maryland state agency deal was scheduled to end following the 2021 season. The Baltimore Post-Examiner also threw in that the Angelos family had a home near Nashville. There were two things left out of that 2019 story that continue to have an impact on any potential move. The Orioles’ ownership stake in the local cable TV regional sports network. Also, MLB may not want to move a team to Nashville when it knows it can charge perhaps as much as $2 billion in an expansion fee. A third factor and this remains a problem in 2021. There is no baseball park that is Major League ready for the foreseeable future in Nashville.

Improved Orioles come to The Trop to face the Rays in a weekend showdown for the final playoff spot. 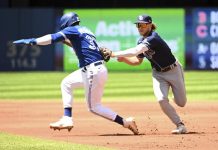