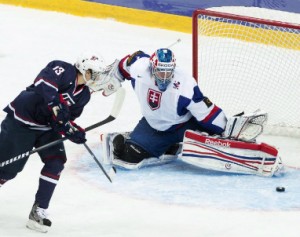 “Today we played outstanding from the goalie out to our defensemen and forwards,” said Phil Housley, head coach of the U.S. National Junior Team. “I think we’re coming into our own as a team. It’s always good to get the first goal, and then in the second period our power play was clicking and we pulled away. We’re looking forward to tomorrow’s semifinal game against Canada.”

Gaudreau notched Team USA’s first goal of the game on a five-on-three power play at 11:46 of the opening period. Seth Jones (Plano, Texas/Portland Winterhawks) and Jacob Trouba (Rochester, Mich./Univ. of Michigan), who each posted four assists, played catch at the point before Trouba sent the puck on goal. The shot was deflected to the right of the net for Gaudreau to slam past Patrik Bartosak.

Just 28 seconds into the second stanza, Gaudreau scored a near duplicate of his first goal of the game. On the power play, a shot from Jake McCabe (Eau Claire, Wis./Univ. of Wisconsin) hit J.T. Miller (East Palestine, Ohio/Connecticut Whale) and went directly to Gaudreau for the tap-in tally. Ryan Hartman (West Dundee, Ill./Plymouth Whalers) put the U.S. up by three 40 seconds later, resulting in a goalie change for the Czech Republic.

Riley Barber (Livonia, Mich./Miami Univ.) boosted the U.S. lead to 5-0 with goals at 8:44 and 12:13. First, Barber and Alex Galchenyuk (Milwaukee, Wis./Sarnia Sting) played give-and-go along the right side with Barber scoring from the edge of the crease. Next, Barber scored on a breakaway that was started by Jones in the U.S. end.

With 13 seconds remaining in the second period, Gaudreau completed his hat trick, again on the power play, to give the U.S. a 6-0 lead. Miller and Jones assisted on the play.

Four minutes into the final stanza, the U.S. made it 7-0 on its fifth-power play goal of the game. Set up in front of the goalie, Miller leaped in the air to avoid a Trouba blast and deflected the puck past the goaltender.

John Gibson (Pittsburgh, Pa./Kitchener Rangers) stopped 31 shots for the U.S. in the shutout, while Bartosek turned aside 10-of-13 shots and Matej Machovsky had a 23-save showing in relief for the Czech Republic.