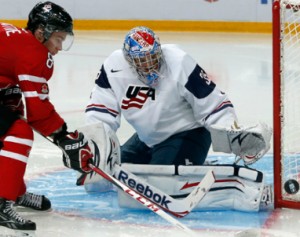 “We got the start we wanted, scoring the all-important first goal,” said Phil Housley, head coach of the U.S. National Junior Team. “We wanted to dictate the pace of the game early and we were able to do that and then it carried into the second period. We’re going to enjoy this win tonight and then start thinking about the gold medal game tomorrow.”

McCabe opened the scoring at 7:18 of the first period. Riley Barber (Livonia, Mich./Miami Univ.) was stopped on a good chance in the slot, but he stayed with the play and feathered a pass back into the high slot. Left alone, McCabe snapped the puck over Malcolm Subban’s glove. With 3:58 to play in the opening frame, McCabe stretched the U.S. lead to 2-0. Vince Trocheck (Pittsburgh, Pa./Saginaw Spirit) and Rocco Grimaldi (Rossmoor, Calif./Univ. of North Dakota) exchanged passes before the puck was deflected to McCabe, who again beat Subban over the shoulder from between the circles.

Three minutes into the second stanza, Gaudreau notched Team USA’s third goal. Gaudreau glided through the left circle on a two-on-two rush, toe-dragged around a defeneman and scored high to the glove side. At the 12:44 mark, Jim Vesey (North Reading, Mass./Harvard Univ.) made it 4-0 for the U.S. Gaudreau streaked down the middle and passed to Vesey, who beat his defender in the right circle and scored low inside the left post. Canada then opted for a goaltending change and sent Jordan Binnington into the net.

Canada cut the U.S. lead to three at 4:03 of the final frame on a shorthanded goal, but Gaudreau converted on a breakaway chance at 15:41 to seal the victory for Team USA.
John Gibson (Pittsburgh, Pa./Kitchener Rangers) stopped 33 shots for the U.S. in the win, while Subban turned aside 12 shots and Binnington made 25 saves for Canada.

The victory gives Team USA a 4-0-0-2 (W-OTW-OTL-L) in the tournament heading into the gold medal game.