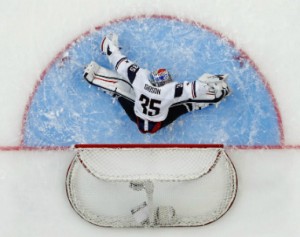 “Both teams played extremely well,” said Phil Housley, head coach of the U.S. National Junior Team. “Both teams were a bounce away from a win and unfortunately for us Russia got the bounce it needed. We’ll take a lot from this game tonight. Our game was where it should be and I’m very proud of the way our guys played.”
Russia began the scoring at 2:42 of the first period, striking on one of its four power-play opportunities in the frame.
The U.S. had the only two power plays of the second period, capitalizing on the latter opportunity at 13:18 to knot the game at 1-1. Jacob Trouba (Rochester, Mich./Univ. of Michigan) positioned himself at the top of the point and one-timed a feed from Alex Galchenyuk (Milwaukee, Wis./Sarnia Sting) past Russian netminder Andrei Makarov for the tally.
Russia reclaimed the lead, 2-1, at the 4:10 marker on a rebound. Team USA had a power play for the final 1:32 of regulation, yet could not tally the equalizer.

Goaltender John Gibson (Pittsburgh, Pa./Kitchener Rangers) stopped 28 shots for the United States and Makarov turned in a 41 save performance for Russia.