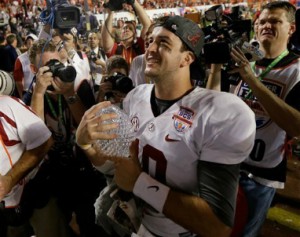 TUSCALOOSA, Ala. — Alabama quarterback AJ McCarron isn’t fixating on the shot at a historic three-peat, BCS-or-bust expectations or the anointment by pollsters as the team to beat.

“I feel like if you don’t think that way, you’re kind of irrelevant a little to the team,” McCarron said. “Everybody needs to have the same mindset. We can’t worry about what everybody thinks, what everybody’s predicting. Just go out and play the game and take one play at a time, one game at a time and we’ll be all right.”

In short, it’s all about Saturday’s game against Virginia Tech. In short, ignore what coach Nick Saban puts under the “external factors” umbrella.

But hard as the coaches and players try to ignore it, the Tide are aiming to make history. Major college football has had repeat national champs 10 times since the first AP poll in 1936. None, however, has made it three in a row and none has gone wire-to-wire at No. 1 since USC in 2004.

Once again, Alabama, which went 13-1 in 2012, has a chance to make a statement early. The Tide have played a ranked team from a BCS conference other than the SEC in the first or second game each of the past five seasons and won all of them, including a 41-14 rout of No. 8 Michigan last year in Arlington, Texas.

The Hokies aren’t ranked, but Saban calls them a “good all-around team.”

This time the Tide have back-to-back potential statement games, counting the Sept. 14 visit to No. 7 Texas A&M after an open date. Last season’s 29-24 loss to the Aggies marked Alabama’s only blemish.

“There’s no external factors that matter at all to any player on our team,” Saban said. “It’s all about how they perform in this game. It’s not what they did last year, it’s not about the girlfriend, it’s not about anything but playing this game. None of it means anything unless you make it mean something.”

Virginia Tech will be looking for a bounce-back year after its nation-best streak of eight 10-win seasons was snapped in 2012. The Hokies needed to win their last two games just to qualify for the postseason and did, then went on to defeat Rutgers 13-10 in the Russell Athletic Bowl.