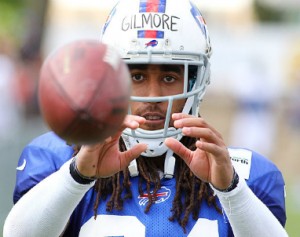 Central to Mike Pettine’s success as the Jets’ defensive coordinator over the past four seasons was the fact that he could line up Darrelle Revis (and, with Revis out, Antonio Cromartie) and ask him to shut down one side of the field. Upon moving to Buffalo this offseason, Pettine began implementing a similar plan with second-year cornerback Stephon Gilmore.

That’s on hold now, with a report from USA Today‘s Mike Garafolo that Gilmore will miss “about eight weeks” with the wrist injury he apparently suffered against Washington on Saturday. Gilmore left that game, a 30-7 Redskins win, in the second quarter and did not return.

For more on this story visit: Chris Burke, Sports Illustrated