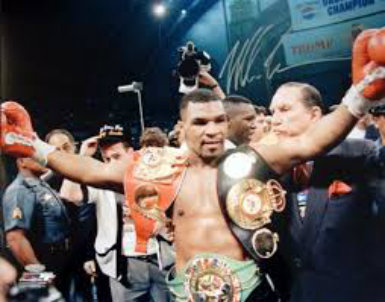 Michael Gerald Tyson turns 49 years old on June 30, 2015. Tyson endured a rough childhood coming from the slums of Brooklyn New York. Eventually, Tyson was able to parlay his troubled background into a legendary boxing career. Known for his explosive punching power, cat like reflexes, and sound defense, Tyson became one of the most feared fighters of all time.

From Evander Holyfield, to Riddick Bowe, to Lennox Lewis, there were several great heavyweight boxers in Tyson’s era. Some of these elite fighters were actually able to expose some of Tyson’s flaws in the ring later in his career. However, Tyson’s legacy is far greater than any of these aforementioned star heavyweights in my opinion. That being said, what made the legend of Iron Mike so unforgettable and different from all the rest?

In my opinion, Mike Tyson wasn’t just born to be a fighter, he was genetically engineered to scare the living day lights out of people. Tyson used his violent background to his advantage as it served as a mental edge over most opponents. Without question, Tyson’s street reputation gave opponents the creeps before they even met up with Iron Mike in the ring. In particular, I recall Tyson’s first round knockout of WBA champion Bruce Seldon in 1996. As depicted in the video below, Seldon seemed petrified by Tyson, so much so that Seldon actually moved backwards as he threw his punches and was knocked down twice with glancing blows.

In addition to his ruthless reputation, Tyson’s compact build was perfect for becoming a crowd pleasing knockout artist. At 5-foot-11, roughly 220 pounds, and an arm reach of 72 inches, Tyson did not have the luxury of being able to jab his opponents from a safe distance. However, Tyson’s mechanical advantages were on full display whenever he fought in close quarters. Tyson not only had explosive power due to his thick musculature, but his shorter arms allowed him to recoil quickly with very little wasted motion. As a result, Tyson would be able to rapidly deliver devastating combinations with machine like efficiency. As his Type II fast twitch muscle fibers fired off like the pistons of an engine, it would usually spell doom for his opposition.

Tyson also displayed the supreme defensive skills needed to fight on the inside without incurring any damage of his own. Trained by the legendary Constantine “Cus” D’Amato, Tyson learned the famed “peek-a-boo” defense. Tyson’s excellent head movement combined with his stocky frame and well trained defensive style made him nearly an impossible target to hit early in his career. At the 1:13 mark of the video below, Tyson ducked well below his opponent’s waist and successfully avoided an on-coming attack.

Tyson rapidly ascended to superstar status in 1986 as he became the youngest heavyweight champion in boxing history. However, Tyson’s downfall also occurred in box office fashion as he later became the youngest man to ever lose his heavyweight crown as well. A once invincible Tyson with an unblemished professional record of 37-0 looked under prepared and visibly sluggish against the mediocre James “Buster” Douglas in Tokyo in 1990.

Vegas bookmakers placed the underwhelming Douglas as a 42-1 long shot before the match. Tyson clearly overlooked Douglas as a highly anticipated bout against the more accomplished Holyfield was looming. Iron Mike paid for his poor fight preparation as he was knocked out in the tenth round in historic fashion. 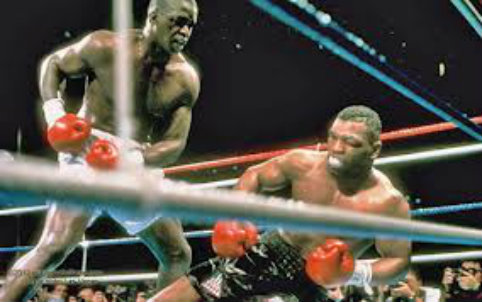 Also making world wide headlines outside the ring, Tyson was convicted of raping Desiree Washington on February 10, 1992. Having his stellar boxing career derailed by a crime Tyson himself believes he did not commit, I think he may have suffered from a mental breakdown while incarcerated. Once Tyson resumed his boxing career in 1995, he was no longer the invincible fighter that we saw rip through the heavyweight division in the 1980’s. Following his prison sentence, Tyson compiled a record of 9-5 with two no contests throughout the rest of his career, a rather pedestrian resume by his lofty standards.

In most of Tyson’s fights after his stint in prison, his ability to slip punches and rapidly throw combinations had greatly diminished. In addition to an erosion of his once explosive skill set, Tyson’s string of erratic and bizarre behavior in the ring made him a sideshow attraction. From threatening to cannibalize the children of Lennox Lewis, to the infamous ear biting incident against Holyfield, it appeared that Tyson had simply lost his mind after his time in jail.

This wild man behavior was in direct contrast to the younger Tyson who would routinely help opponents up off the canvas after administering a hellacious beating. Such unpredictable behavior as illustrated in the video below added an element of shock value with Tyson later in his career.

I think the public fascination with Tyson lies in the fact that his success was equally as explosive and shocking as his downfall. From knocking Trevor Berbick senseless in a second round demolition to gain his first heavyweight belt, to getting beaten to a bloody pulp by Lennox Lewis in his final heavyweight title bout, the twists and turns of Tyson’s career sends fans on an unforgettable roller coaster ride of emotions.

In addition, Tyson’s inability to manage the wave of ups and downs in his career made him tabloid fodder that the media preyed upon. I think Tyson’s own self destructive behavior combined with his very poor support system contributed to the disappointing second act of his career. Had Tyson’s support system in the latter portion of his career been as strong as it was when he was working under the D’Amato camp, I think Mike would have had a much better chance to win against Holyfield, Lewis, and certainly Douglas. 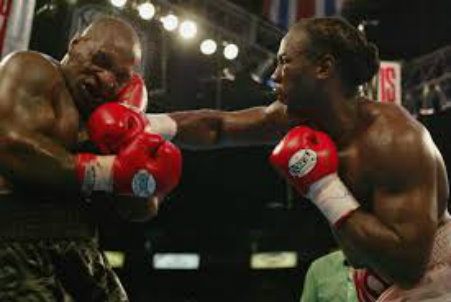 Today, Mike Tyson has settled into the surprising new role of an affable and funny character. From his memorable appearance in “The Hangover”, to his excellent narrational performance in HBO’s “The Undisputed Truth”, the softer side of the once vicious prize fighter has given Tyson added interest in today’s pop culture. In 2013, Tyson also launched “Iron Mike Productions”, a boxing promotions company which features 17 current fighters from nine different weight classes.

For all the reasons listed above, Tyson remains such a fascinating personality to study. At this stage of his life, it seems like Mike is able to embrace his imperfections and make peace with most of his transgressions and failures. For someone who admired Tyson’s destructive power in the ring, I am genuinely happy for him that he has managed to keep his inner demons at bay while carving out a new niche for himself. I would like to wish a very happy birthday to Iron Mike Tyson, the former undisputed heavyweight champion of the world, the Baryshnikov of beat downs, and one of the most exciting athletes I have ever laid eyes on.