In this edition of ELOOnline, Eric talks to  softball pitching  legend Angela Tincher. Tincher  reflects  about her career at  Virginia Tech where she was an  All-American and led the Hokies to the Women’s College World Series in 2008. Tincher pitched one of the most memorable games in the sport’s history on March 26, 2008  when Tincher no-hit  the United States Olympic Team with 10 strikeouts in a 1-0 win snapping the USA 185 pre-Olympic win streak that dated back to 1996. Tincher number 1 jersey is just one of 12 overall jerseys retired at Virginia Tech as they retired Tincher number prior to a Hokie Football game on September 13, 2008 against Georgia Tech.  Tincher who ranks 3rd all-time in College Softball in strikeouts with 2,149 behind only Monica Abbott and Cat Ostterman also discusses watching both Cat and Monica pitch over the years.

Angela Tincher  was the 3rd overall pick in the first round draft  back in 2008 and would end being all NPF -Team that season. Tincher talks about  about playing in the NPF for the Akron Racers as well as playing professional in Japan and comparing playing in the United States and Japan.

Currently  Tincher lives in Orlando and serves as a color commentator for the USSSA Pride  along side Bernie Guenther. Tincher discusses going into broadcasting softball and comparing it to playing Softball and what she is doing now that she is retired from Softball her life Watch this edition of ELOOnline for the exclusive interview with  Angela Tincher. 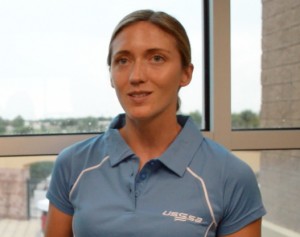