In this edition of ELOOnline, Brittany Mack and Rachele Fico talk softball with Eric Lopez. The two players pitched together and were the 1-2 punch  at LSU leading the Tigers to the Women’s College World Series in 2012. Now Mack and Fico  are reunited on the Akron Racers of the National Pro Fast Pitch Softball League. Brittany Mack  was the number one  overall draft pick in 2012 NPF Draft by the USSSA Pride. One year later Rachele Fico was selected as the number one pick of the  2013 NPF Draft by the Racers. Mack would end up going to the Racers after 1 season with the Pride.  Watch this exclusive interview to hear Mack and Fico talk life in the NPF, Playing together once again at Akron, Memories from LSU and much more in this exclusive. 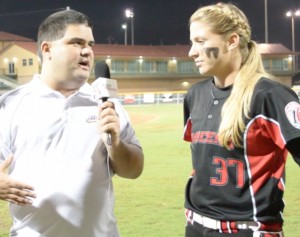