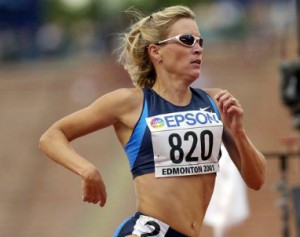 Suzy Favor Hamilton was a middle distance runner, competing in three Olympics—most notably, the 1500 meters in Sydney, where she collapsed to the ground coming down the stretch. But she’s probably best known for this 2000 Nike ad, in which a sports bra-clad Favor Hamilton outran a masked chainsaw-wielding psycho—drawing claims that the commercial objectified women as sex objects and victims.

Since retiring in 2006, Favor Hamilton started a family, entered the real estate business with her husband, and travels the country as a motivational speaker. And, according to The Smoking Gun, has spent 2012 working as a Las Vegas call girl.

Incredibly strong work by TSG here, revealing that as “Kelly Lundy,” the 44-year-old Favor Hamilton has been part of Haley Heston’s Private Collection escort service (link NSFW), booking “dates” in Las Vegas and traveling to cities around the country. Her profile on the site, since taken down, shows that Favor Hamilton charged rates of $600 an hour, up to $6,000 for a 24-hour period.

For more on this story visit: Barry Petchesky, Deadspin