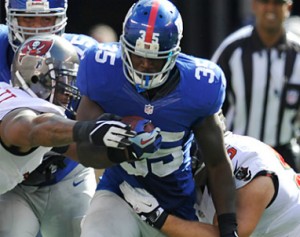 He limped off the field against the New England Patriots after a 3-yard run late in the first half Thursday night. He then walked slowly to the locker room, where X-rays showed a broken leg.

Brown rushed for 385 yards last season, second most on the team, before breaking his leg in November. He led the Giants with eight touchdowns on the ground as the backup to Ahmad Bradshaw. With Bradshaw now with the Indianapolis Colts, Brown was the backup to David Wilson, who rushed six times for 37 yards in the first half.

Brown had two carries for 4 yards.