Jersey City, NJ- Troy Merritt began Thursday’s opening round of The Northern Trust 72nd in the FedEx Cup Standings, two spots short of advancing to the BMW Championship at Medina next week. He missed the cut at last week’s Wyndham Championship and at the Barbasol and John Deere before that. The Meridian, Idaho, resident did finish second at the Barracuda Championship two weeks ago, but recent performance didn’t earn prime position. Merritt described his recent stretch as: “Feast or famine the last six weeks. It’s either been missed the cut or Top-10.”

He had the second tee time of the tournament at 7:21 AM off the back nine. And his round began when there was no general attendees, thanks to storm damage from the prior night. The Idahoan began his tournament in relative obscurity. The folks who could see him, though, were treated to a show.

The 33 year old Boise State Bronco recovered from a bunker on 10 for a par, then notched four straight birdies. He added a fifth birdie on 17 following an approach shot from 155 yds out to 7’3” of the hole. 18 featured a beautiful recovery from the rough, but not another birdie. The next nine holes featured more of those.

Merritt recorded birdies on 1, 4, 5, and 6 to claim the tournament lead. Hole 6 featured a pair of shots from the rough including a chip from above the green to 9’7” of the pin. He recovered from a fairway bunker on 7 for par and played 8 and 9 without incident to complete a 62 opening round.

The score ties the course record, set in 2013 by Kevin Chappell Hunter Mahan’s opening round of the 2008 (then called) Barclays for the best opening round in the 53 year history of the tournament. He ended only one stroke back of Brandt Snedeker’s tournament record 61 for best round on a 71 par course.

He hit 11 fairways and 14 of 18 greens in regulation and recorded and saved par all four times he had to scramble.

In his own words, “That putter was hot today and the greens were rolling beautifully. We put together two nine-hole rounds of birdie free golf today and we’ll focus on just getting the ball in play tomorrow and hitting greens and see if that putter stays hot.”

Remarkably, Troy Merritt is doing this a year removed from serious surgery. On August 3rd, 2018, only 11 days after claiming his second PGA Tour victory at the Barbasol Championship in Kentucky, Merritt was diagnosed with Thoracic Outlet Syndrome. He went under the knife to remove a blood clot stretching from his chest to his biceps. “It was really painful around the elbow where they had the clot out. I’d prefer to never experience that again.”

Surprisingly, he took the course the next week for the PGA Championship in Bellerive and while he missed the cut that week, he proved his toughness.

Merritt will have a bigger audience takes the course at 12:11 pm ET tomorrow off the first tee alongside Bubba Watson and Charley Hoffman. 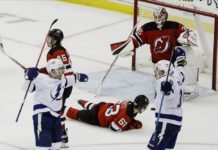 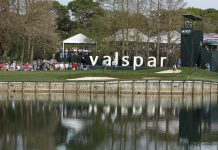 PGA Valspar Championship at Innisbrook: Strong field assembled for the Bay Area tournament as the Masters draws near. 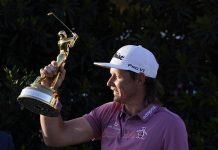