Woods falls just short in a memorable finish at the Open

Wherever one went on Sunday morning, Tiger Woods was there.

Golf stopped the world for a bit on Sunday around noon, as Woods at one point Sunday was tied for the Open Championship lead.  When he putted, anyone within eyeshot of a television screen held their breath.  Skeptics, true believers, and the casual alike could not believe what they were seeing.  No matter how long people have been waiting, seeing Tiger in that red shirt, pumping his fist again was a welcome sight and one many thought they would never see again.

Francisco Molinari won the tournament, and deserves the full accolades of the grand title “Champion Golfer of the Year.”  The Italian played alongside Tiger, his gallery, and all the hope that went with it and he did not crack.  He played under par on a day where most, including Tiger, struggled to keep their scores for the day level.  He held off the legend, he held off one of the greatest European golfers in anyone’s memory in Rory McIlroy, he held off 24 year old Xander Schauffele, and he outlasted defending champion Jordan Spieth.

Carnoustie did not get a reputation for possibly being the toughest test in the Open Championship rotation by being dependent on weather.  The ideal conditions on Thursday and again on Saturday can only account so much for what happened over the weekend.  Against the 2006 field, -5 might have won this tournament in these conditions.  In fact, it might have won it by several strokes.  Woods’ weekend charge would, against those fields, likely have resulted in victory.

It isn’t just that the PGA TOUR field is better in 2018.  The European Tour has a much more impressive field now than it did twelve years ago as well.  The Tiger Effect was not just limited to America.

Rory McIlroy is better already than any of Tiger’s previous competitors from the United Kingdom.  Remember Tiger’s second Open win, in 2005?  He beat out Colin Montgomerie to get the Claret Jug.  McIlroy is a level above that, and considerably younger than Monty was then.

Jordan Spieth is just 24, and already has three major championships to his name.  He plays an exciting style of golf, unafraid to hit risky shots, but it’s also a highly analytic take on golf as he mulls things over with caddie Michael Greller so often.  Spieth is like nobody Tiger ever had to face in his dominant stretch.  `He approaches the game differently, he plays differently, he treats his caddie differently, and he gets along with just about the entire PGA TOUR.

Francesco Molinari has been on the periphery of seemingly every leaderboard at every big tournament in recent memory.  This is only the third major where he has finished inside the top ten, but he was masterful at Carnoustie on Sunday.  What’s more, Molinari made his charge to the top as Tiger Woods’ playing partner for the day, a feat that used to be nearly unheard of.

2018 is turning out to be a banner year for Molinari.  He won the BMW PGA Championship, the European equivalent to the fourth major, in May.  He won the Quicken Loans in June by eight strokes over the competition.  Now he has his third win in three months, his first major, His game has picked the right time to emerge, with the Ryder Cup coming up soon in an era where simply making the team is an accomplishment.  Molinari is now all but a certainty to play in the fall event, golf’s international showcase.

Not only was Molinari’s victory this week hard-earned, then, but it is emblematic of a career where everything has been hard work, everything has been earned.  He is the first golfer from Italy to win a major championship, adding another country to the impressive list of nations that have produced a championship golfer.  This is more proof that golf is a world sport in every sense of the word.

In his prime, golf tried to give Tiger Woods a rival in Phil Mickelson.  The two have, usually to Mickelson’s detriment, often been compared to one another.

Mickelson is 48 years old.  He has been playing with arthritis for years now.  Yet still, Phil competes regularly at tournaments.  It is not unreasonable to pick him to win majors to this day.

Tiger is 42.  The best golfers in the field are largely in their twenties.  Schauffele, Spieth, and Justin Thomas are all under 25.  Should Woods stay healthy, golf fans could be treated to five more years of nail-biting majors with Tiger somewhere in the field.  That’s twenty majors, plus five Players Championships, three Ryder Cups counting this year, and as many as five Tour Championships at the end of the FedEx Cup Playoff.

Let that be the Tiger fan’s takeaway from the Open Championship this year.  Do not treat this as an anticlimax.  This is the beginning of Tiger Woods’ third act, a victory lap that will last as long as his body allows and could still bring him more titles.  Tiger looks healthy again.  He’s capable of hitting the shots he needs to hit to win.  He’s capable of making long putts, as he demonstrated all weekend.  The consistency isn’t yet there, but the longer he stays healthy the more consistent Tiger will be.

This performance will make it hard for Ryder Cup captain Jim Furyk to pass up on Tiger Woods.  Woods is already going to be a vice captain for the event, as he was in 2018, but he is playing his way up the rankings fast and would certainly draw attention to one of golf’s signature events by playing.

Not only is this a different Tour, this is a different Tiger Woods.  The golf world has never seen this version of Mr. Woods.  He seems happy just to be back on the course regularly again, happy for the gallery, happy in a way he never let people see before.  The less well-behaved crowds of 2018, galleries Tiger never had to face even if his old ones were bigger, simply don’t seem to bother him.  This was a guy who seemed annoyed by the presence of cameras before.  Now people can shout in his backswing and he’ll just collect himself to swing again.

Focus now shifts to St. Louis.  Specifically, it focuses on Town and Country, Missouri, and Bellerive Country Club, where August’s PGA Championship will take place.  It is the last time the PGA will be held in August, as next year’s schedule puts the tournament in May as golf scrambles to make sure its season finishes before the NFL season begins.

It will be Bellerive’s first major since the 1992 PGA, having undergone extensive renovations since then.  It’s unclear whether the course will play a little bit easier than the tough tests of the US Open at Shinnecock and The Open Championship at Carnoustie, but the PGA has a reputation for being more of a low-scorer’s tournament. 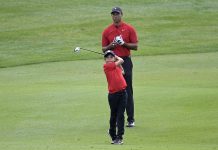 Is the next Tiger Woods his son Charlie?