Farmingdale, NY- The 101st PGA Championship begins on Thursday morning. The field taking to Bethpage Black’s famed grounds is among the most decorated the PGA has ever produced, and will be likely the best field any tournament yields all season. 156 professional golfers, including all 100 of the top ranked golfers in the world, entered the week on the playing roster. Tiger Woods is drawing the lions share of attention and eyeballs. And while he deserves the headlines, the other 155 golfers have stories to write as well.

A good place to start is with the other members of Woods’ trio. Brooks Koepka and Francesco Molinari won the last two majors before Woods’ Master’s win this year. Koepka outdueled Tiger at Bellerive last year for the PGA Championship and Molinari became the first Italian to win a major by claiming the 2018 Open Championship. Koepka opened the year by winning the CJ Cup Nine Bridges event and tied for second at both the Honda Classic and the Masters. Molinari has fared slightly better this year, with three top-five finishes and a victory at the Arnold Palmer Invitational. The only poor mark on Molinari’s season was a late weekend collapse at Augusta to fall to fifth at the Masters. Still, he has recovered and appears ready to play with the world’s best again.

Other than Tiger’s chase for history, Jordan Spieth has the biggest historical measure on the line. A win makes him the sixth PGA player ever (after Gene Sarazen, Ben Hogan, Gary Player, Jack Nicklaus, and Tiger Woods) to record a career Grand Slam. To get there, he’ll have to overcome a poor recent stretch. The former Texas Longhorn had his best year in 2015 when he won both the Masters and US Open and finished as the runner-up to Jason Day at Whistling Straits. Spieth added the 2017 Open Champion title but has not won a Tour event since. He went winless all of 2018 and has only recorded two Top-25 finishes so far this season. A possible positive indicator is that Spieth finished 21st at the Masters, his best outing this year. But there is plenty of work for Spieth to do to reach an all-time milestone.

Despite the strong total season showings, both are still looking for a Major breakthrough. DeChambeau famously called last year’s US Open at Shinnecock Hills “clown golf” and his best performance at any major to date was 15th at the 2016 US Open. He missed the cut entirely at the 2018 PGA Championship.

Finau has fared much better at Majors so far. He finished top-ten at the Masters, US Open, and Open Championship last season and finished tied for fifth at this year’s Masters. Both are looking for quality performances to join the true elites and move from the “next guy up” club.

With Sung Kang winning last week’s AT&T Byron Nelson, Chile’s Joaquin Niemann, a 20-year-old who made the cut at last year’s PGA Championship, flexed into a spot since Kang (75th in the World Golf Ranking)was already going to Bethpage.

The most notable departure came on Monday when 2017 PGA Champion Justin Thomas withdrew due to a wrist injury. The 26 year old from Louisville, KY, was ranked 12th in the FedEx Cup Standings and the fifth-ranked golfer in the world according to the WGR.

“He’s extremely disappointed not to be here,” said Jordan Spieth about his friend’s absence. But I think he’s going about it the right way, seeing the long-term over the short-term and making sure he’s 100 percent before he could possibly make any matters worse. He seems to be really diligent in his recovery and his and who he’s talking to and what he’s going through. He’s got great people around him, and certainly as a friend of his, I hope for as speedy a recovery and as successful a recovery as possible.”

Club Pros Get Their Chance

Among the best part of the PGA Championship is the opportunity for club professionals to compete. The twenty lowest scorers from the PGA Professional Championship, a tournament for the top club professionals and teachers from around the country, earned a spot at the PGA Championship. It’s not likely for any one of these guys to win, but they’re in the field and all have an opportunity. Nearby players Alex Beach (Westchester Country Club, Rye, NY), Danny Balin (Fresh Meadow Country Club, Lake Success, NY), and Rob Labritz (GlenArbor Golf Club, Bedford Hills, NY) have all competed in previous PGA Championships while
Jason Caron (Mill River Club, Oyster Bay, NY) is at his first. All are compelling golfers to watch and should draw good support sections, being from the Empire State. First Timers Justin Bertsch (Hideout Golf Club, Naples, FL), Cory Schneider (The Pointe Golf Club, Powells Point, NC), and DII Ferris State alum Ben Cook (Johns Island Club, Grand Rapids, MI) also have fun stories to pay attention to. 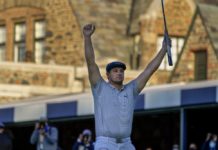 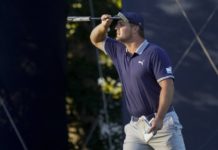 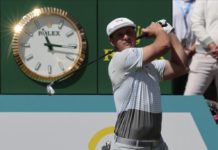 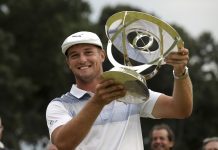 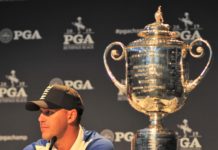